Queenstown Lord of the Rings Tour 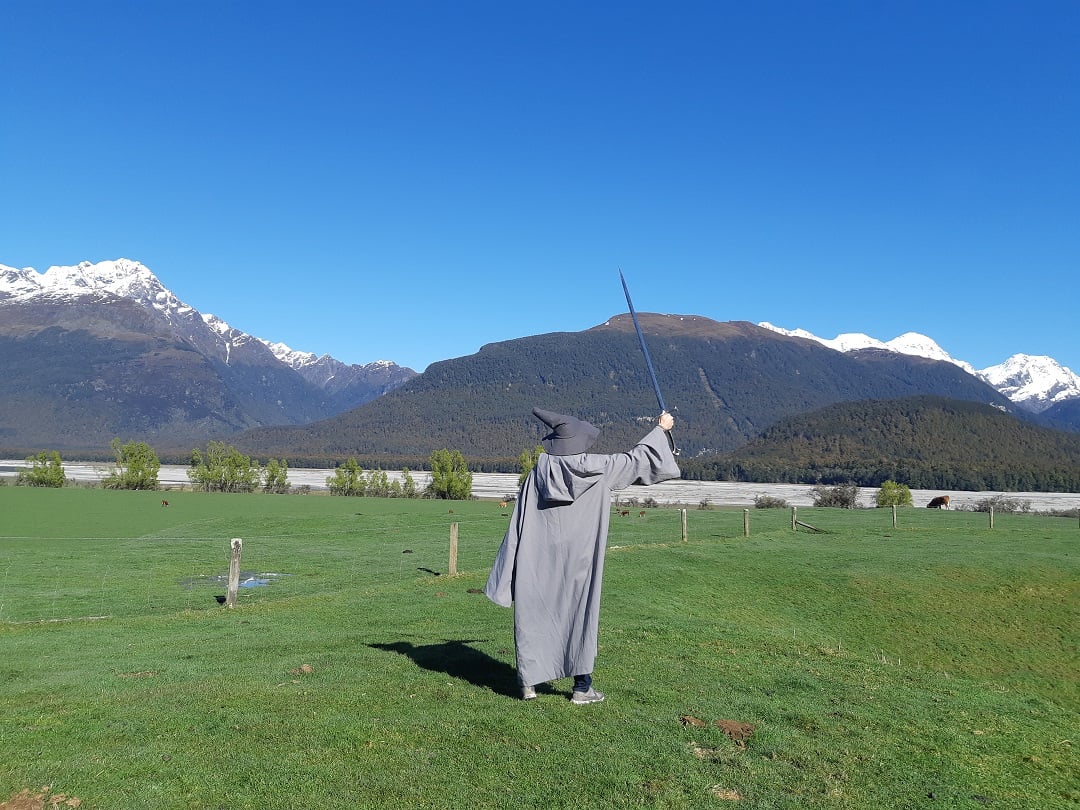 This blog is all about a Queenstown Lord of the Rings Tour including our review of the tour, what to expect through our personal experience, and everything you need to know before you go!

The movies were filmed all over the country on both the North and South Islands. However around Queenstown, you can find so many great film locations that will get any LOTR’s fans excited!

With that said, you don’t have to be a huge Lord of the Rings fan to be able to appreciate the beautiful locations they used in the films, the incredible facts about the movies, as well as all of the work that went into making them.

In fact, a Lord of the Rings tour in Queenstown is perfect for both those who love the trilogy and people looking for amazing views and an epic road trip from Queenstown to Glenorchy.

Here’s everything you need to know about a Queenstown Lord of the Rings tour and what to expect!

About Lord of the Rings Tours in Queenstown

Lord of the Rings tours in Queenstown are of course based around visiting the film locations near Queenstown. There are lots of film locations all over the Queenstown and Glenorchy area and although you can’t visit them all on just one tour, you’ll be taken to lots of the most famous scenes.

You won’t just learn where Peter Jackson chose to film the movies either. Instead, you’ll also learn all about the production of the films and how a country so small managed to get so many extras for the huge war scenes.

All of this is as interesting as visiting the film locations and if you’re a fan of Peter Jackson, his story from local Kiwi to famous film director is very inspiring!

With that said, you’ll also tour some of the most breathtaking areas of Glenorchy. So despite being centered around LOTR, this tour is also very scenic!

Most Queenstown Lord of the Rings tours run for between 3 to 4 hours however there are also full-day 7 hour LOTR’s tours. Tours include a picnic lunch, guide, and transport in an airconditioned or heated van. Choosing the tour you want to do will depend on how big of a fan you are. To me, the half-day tour was perfect!

Our LOTR’s Tour – How Our Day Went

Here’s our personal experience on our Queenstown Lord of the Rings tour. This should give you a great idea of what to expect, photos from the trip, and help you decide if a LOTR’s tour from Queenstown is for you!

The scenic drive to Glenorchy

Queenstown Lord of the Rings scenic tours begin in Queenstown but the adventure starts as you begin the drive towards Glenorchy.

Glenorchy is a small town located 45 minutes from Queenstown. The town of Glenorchy is home to under 300 residents and visiting is one of the best things to do in Queenstown.

Within Glenorchy itself, you can enjoy spectacular views, but the drive from Queenstown to Glenorchy is known as one of the most scenic drives in all of New Zealand!

As we drove the windy roads along the shore of Lake Wakatipu towards Glenorchy, our guide began the tour by telling us about how Peter Jackson (a Kiwi from Wellington) ended up getting the job as the director of the Lord of the Rings trilogy. We also learned about the amount of money spent in the 7 years it took to plan, film, and edit all three movies (this will shock you!)

We stopped at an incredible viewpoint along the road to Glenorchy and our guide explained about the surrounding mountains we were looking at. We were given some general knowledge but also we were told about some famous Lord of the Rings locations as well. The “Misty” mountains sat right in front of us and we could even see the snow-covered peak in which Boromir found the ring!

After that, we headed to Glenorchy where we had a quick tour of the town before we were off again, but this time we were headed to somewhere even more remote!

We drove along gravel roads next to fields full of sheep. Luckily it is spring and we saw lots of the cutest baby lambs running around in the fields chasing one another and their mums. After another short drive, we stopped in a gorgeous valley to learn about a few more Lord of the Rings scene locations as well as play dress up!

From this viewpoint, we saw the walking trees or Ents forest, the battle of Isengard, a scene from the hobbit, and lots more (that you’ll have to do the tour for yourself to find out!)

All those amazing views had made us hungry and our Lord of the Rings tour included a picnic lunch! We enjoyed tea, coffee, water, and other drinks as well as ate yummy sandwiches made with local produce. It was the perfect place to enjoy a picnic!

Related Read:   10 BEST Foods to Try in Queenstown - A Bucket List for Foodies!

Off to more film locations!

Our next stop was in a forest within Mount Aspiring National Park, otherwise known as Lothlorien in Lord of the Rings! We wandered the forest and were shown famous fighting scenes from the movies.

Our final stop on our way back to Queenstown was a very famous scene most will remember. It involved a short ten-minute scenic walk to the exact location of the scene where Sméagol brings the rabbit back to Frodo and Sam cooked the rabbit and potatoes stew over the fire.

At this stop, the fire used in the films still remains which is really cool!

Related Read:   Is Hobbiton Worth it? - Hobbiton Review

More than a Tour for Lord of the Rings Superfans

The Queenstown Lord of the Rings Tour was not just an awesome tour for LOTR fans, and I highly recommend it to those who want to do a bit of sightseeing as well.

I mean, after doing the tour, it’s obvious that Peter Jackson chose the most beautiful locations around Queenstown to use in the films!

I personally have never read the books and have only watched the movies once (years ago I might add!) I was a bit nervous that I would be out of place on this tour but soon after I got in the van the tour guide assured me that many people join this tour just for scenic views.

Even if you’ve never seen the movies, this Queenstown Lord of the Rings tour will still be enjoyable! The scenery and breathtaking viewpoints are so worth it!

I have done so many tours in Queenstown and I have to say that the Queenstown Lord of the Rings tour is one of my all-time favorites! The reason?

Well, I loved learning about the films even though I wasn’t a super-fan. I guess I was impressed at the attention to detail and the amount of planning that goes into making movies – especially LOTR.

Our guide was also super informative and kept the tour interesting from start to finish. He knew so much about the films that everyone will learn something new on the tour.

Of course, my favorite part was the breathtaking views we got to enjoy along the way. Literally, everywhere you look is stunning and having a picnic in amongst it was a memorable experience.

Overall the Queenstown Lord of the Rings tour gets a two thumbs up from us and our personal recommendation!

I obviously haven’t done every Lord of the Rings tour offered in Queenstown but if you liked the above photos and tour itinerary you can book the exact LOTR tour we did here!

What’s included in the Lord of the Rings Tour

Our Queenstown Lord of the Rings tour with Pure Glenorchy included transport in a nice van, an amazing picnic lunch, water, informative guide, and costumes to dress up in. With all this, it’s not necessary for you to bring anything other than your camera, smile and some comfortable footwear!

After living in Queenstown for 6 months the Lord of the Rings tour actually took us to new places we hadn’t ever been (and trust us, we do a lot of exploring!)

This trip definitely gets my tick of approval and is something I surely won’t forget!

If you have any more questions about the tour or things to do in and around Queenstown then leave a comment below! If not, then be sure to check out all our Queenstown and NZ blogs on our official Queenstown page and New Zealand page.

Our New Zealand bucket list – 33 unique things to do!

An Epic Road Trip from Queenstown to Milford Sound