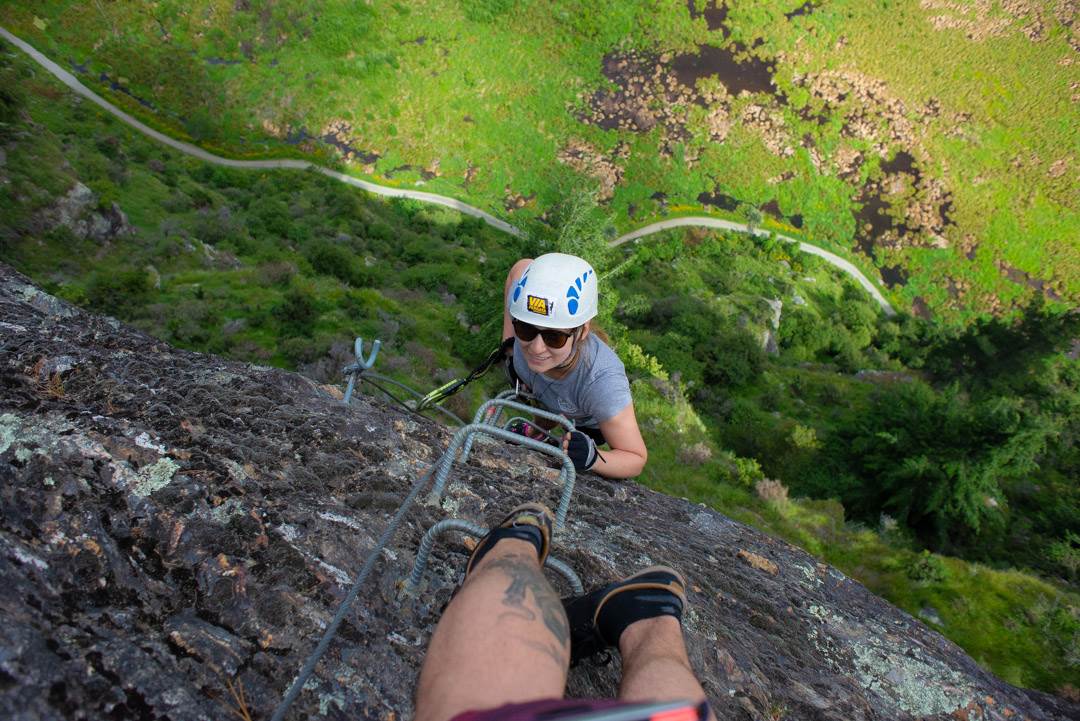 The Via Ferrata climbing tour is quite possibly Queenstown’s most unique adventure tour. But what exactly is Via Ferrata and what does it involve for those with no previous experience? Well, in this post we answer all of that and more!

Rock Climbing is one of Queenstown’s many popular summer activities. Every summer thousands of climbers come to test their skills on the world-class climbing routes in the area.

However, if rock climbing is something you haven’t done before, then heading out onto a rock face to give it a go can be daunting, and not to mention a little boring. The reason for this is that you’re likely not going to climb very high or far on your first time.

Via Ferrata, however, is perfect for anyone regardless of experience level.

With Via Ferrata, you can climb as high the most experience rock climber and have a great time doing it!

Before last week, Bailey and I had no idea what Via Ferrata was, but as we found out, it’s a great activity for those after a little challenge!

What exactly is “Via Ferrata”?

Unless you’re from Europe or have done Via Ferrata before it’s likely you’re not sure what it is.

Well, “Via Ferrata” is actually an Italian phrase meaning “iron path”. In short, Via Ferrata is a path up a cliff face made with iron rods that you use to climb. Think of ladders, steps, and handles made of iron to assist in your climb.

Back in the day Via Ferrata was used as a way of simply getting around/up cliffs and was used in both the first and second World Wars. But these days, Via Ferrata is simply a fun thing to do and often seen in adventure-based tourism!

It is a great way for people without rock climbing experience to give climbing a go!

In Queenstown, there is only one Via Ferrata route and its owned and operated by the company called Canyon Explorers!

Can anyone do Via Ferrata?

Anyone with a reasonable level of fitness can join the Via Ferrata tour in Queenstown.

There are two climbing routes that cover different fitness levels. Both Bailey and I climbed both routes and found them not to be overly challenging strength-wise. Your guide will also show you how to use your legs instead of arms to make climbing the wall even easier.

On the wall, you are also able to rest frequently. This is done by sitting back in your harness so you no longer need to hold yourself up. There are also sections where you simply walk to the next cliff face.

What about a fear of heights?

This is a hard one to answer as everyone deals differently with heights.

I’m not overly fussed by heights, and Bailey has some comfort with heights, but not nearly as much as me! Bailey did find it a little bit scary at first but soon after starting to climb she had no issues. Plus, being a little nervous is all part of the fun!

I think it’s important to understand that the entire time you are hooked up with a safety harness so even if you have a fear of heights you can do Via Ferrata – and in the end completing the climb would be even more rewarding for you!

About the Via Ferrata Tour in Queenstown

The full Via Ferrata tour in Queenstown climbs to over 300m! This is done in two main sections, the bottom half and the top half.

This Via Ferrata route is located just outside of Queenstown and involves only a 5-minute drive to the start. From here, you will go through gear checks as well as some training to get you ready.

The tours run with a maximum of four people to one guide so there is lots of one on one training and guidance over the whole climb!

Once on the wall, the real fun begins.

It starts with some rather easy ladders, this is where I built all my confidence and got used to the procedure (it’s so simple, but it helps to practice).

We continued to climb the wall and conquer the harder spots while our guide watched closely. We rested at halfway and then began the last part of the climb.

The total climb time was around 2 hours, but with breaks the tour lasted over 3 hours.

Check out prices and availability on the SAME Via Ferrata tour we did!

What we really thought of the Via Ferrata Experience

Overall, we thought that Via Ferrata was a great activity that was both fun and challenging.

In my opinion, this is the perfect activity for those wanting to experience rock climbing or overcome a fear of heights. By the end of the tour, both Bailey and I felt really comfortable on the wall and would definitely give Via Ferrata another go!

Plus, the views from up on the wall were unlike any you could get elsewhere – simply breathtaking!

We also joined Canyon Explorers on their canyoning tour in Queenstown – it was equally as exciting and fun!

Via Ferrata isn’t the only awesome adventure tour in Queenstown, in fact, there are tons of awesome tours in Queenstown!

If you want some adrenaline on your holiday, then Queenstown in the best place to find it in all of NZ!

Here are some heart-pumping and exciting tours and adventures you should do while in Queenstown:

Make the Most out of Your Time in Queenstown

Visiting Queenstown can be overwhelming, there is just so much to do and see!

We are experts on Queenstown (we actually lived there for a significant amount of time!) We have written so much about it to help people like you make the most out of their trips and having the best time possible.

Some of our Queenstown blogs you might find helpful are:

Where are you going next in NZ?

Leaving Queenstown? Check out all our posts on New Zealand here, including Mount Cook, Milford Sound, the Catlins and so much more!