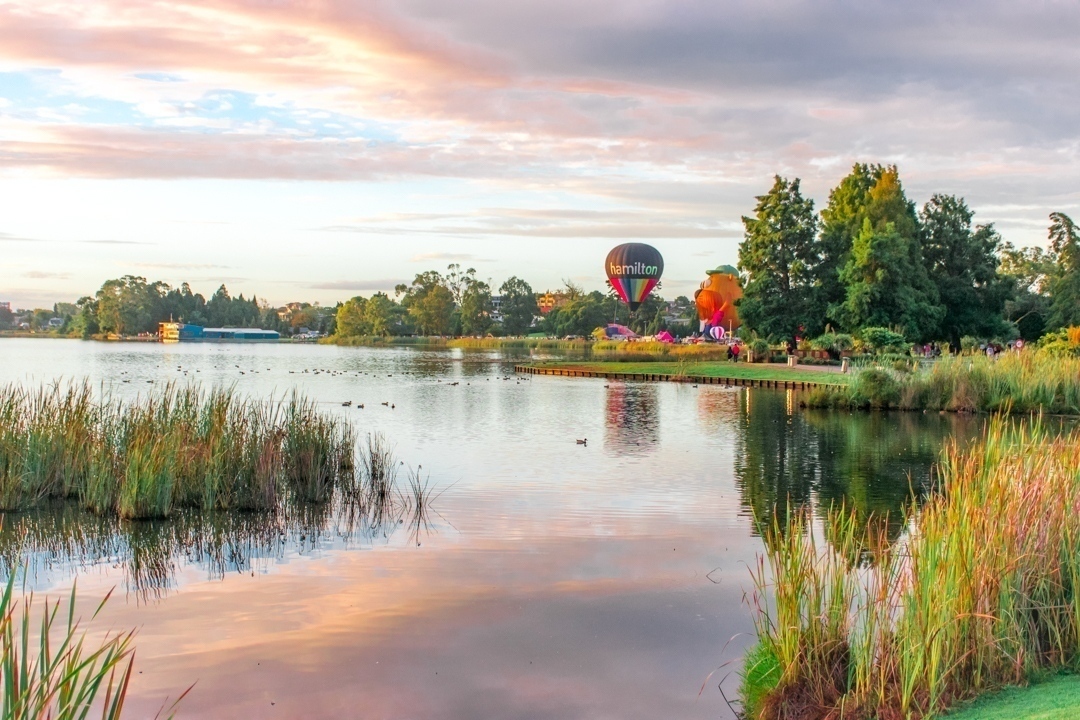 This blog is all about the Hamilton Hot Air Balloons Festival including what the festival is like and what to expect as well as tips to know before you go!

Hamilton is a city on the North Island of New Zealand which often gets a bad reputation for not having anything to offer tourists. In fact, many tourists skip Hamilton altogether or simply use it as a base for exploring Hobbiton or the Waitomo Caves.

We have spent a few weeks in Hamilton visiting friends and although there isn’t too much to do or see in Hamilton, they do have a really cool festival once a year – the Hamilton Hot Air Balloons.

Since arriving in New Zealand, Dan and I have been spending so much time in Hamilton with friends that it was only natural that we were going to check out the Hamilton Hot Air Balloons.

This is our opinion of what the Hamilton Hot Air Balloons Festival was really like, what there was to do, and if it is worth a visit.

What is the Hamilton Hot Air Balloon Festival exactly?

The Hamilton Hot Air Balloons Festival happens every year in March. It is a 5-day long event that offers a variety of activities involving hot air balloons. This event is officially called “Balloons over Waikato.” In 2020 the festival starts on the 17th and runs to the 21st.

The Hamilton Hot Air Balloons is a celebration showcasing over a dozen different hot air balloons.

The festival runs for five days, ending on Sunday. Each day features a different activity. Some of the activities include a free breakfast while the balloons inflate over the lake, hot air balloon cash grab competition, and the final night of a glow show complete with fireworks.

We didn’t go to every daily activity at the Hamilton Hot Air Balloons Festival, but we went to two of the most popular!

The first activity we saw was the Cash Grab Competition. This event is actually sponsored by McDonald’s (hence the McDonald’s food tent that was set up) and involves each hot air balloon trying and grab a key that is attached to a pole. Successfully grabbing the key means $1000 for the balloonist!

This was a neat event to attend as it is all about showcasing the talents of the balloonists and enlightening people about the skills required to actually fly a hot air balloon.

The Cash Grab Competition was held on Saturday morning at about 7:30 am. It was at the Innes Common in Hamilton which made a nice setting with the lake.

The Zuru Nightglow is the most popular event of the Hamilton Hot Air Balloons Festival. In fact, this event attracts more people than any other event in Hamilton.

The Zuru Nightglow is an outdoor event in which the main attraction is all of the balloons inflating and then lighting up in the dark sky to music. The balloons light up using the fire in which inflates the balloons and makes them float. After the “glow show” there is a firework presentation.

Besides watching the balloons glow and the fireworks, beforehand there are musical performers and lots of rides to entertain the kids. There is lots of food options and even a pop-up bar. Families all gather in the late afternoon and enjoy the event until it gets dark and the balloon show starts.

When we arrived at about 6:30 pm, the event was already in full swing. Thousands of people were sitting on the lawn in front of the balloons on picnic blankets and the rides were all operating continuously.

There was a band playing music and people dancing. Some of the balloons were just starting to inflate at this point.

The Zuru Nightglow is usually held on the last night of the Hamilton Hot Air Balloons Festival which is Sunday. However, this year it was changed to Saturday evening due to bad weather predictions for Sunday. The event is held at Hamilton University and is completely free of charge. In fact, attending any of the events is free.

For information regarding dates and times of events for following years check out the Balloons over Waikato website.

Can you ride in the balloons at the festival?

Hot air balloon rides must be booked in advance as they typically sell out.

Where to Stay for the Hamilton Hor Air Balloon Festival

If you are visiting Hamilton for the hot air balloons then booking somewhere to stay nearby to void having to find parking is a great idea! Some great accommodation options are:

Is the festival worth going to?

Overall, the Hamilton Hot Air Balloons were pretty cool. I had never seen so many hot air balloons at once or been so close before so that in itself was interesting. We had a good time seeing the balloons take flight during the day and then got some great pictures of the night show.

Would I recommend traveling from across New Zealand to attend the Hamilton Hot Air Balloons Festival? No. But, if you are in the nearby vicinity already I would say it is definitely worth a visit.

New Zealand continues to blow us away! So many beautiful places and things to do and see! Check out some of our other blogs about our favorite places!