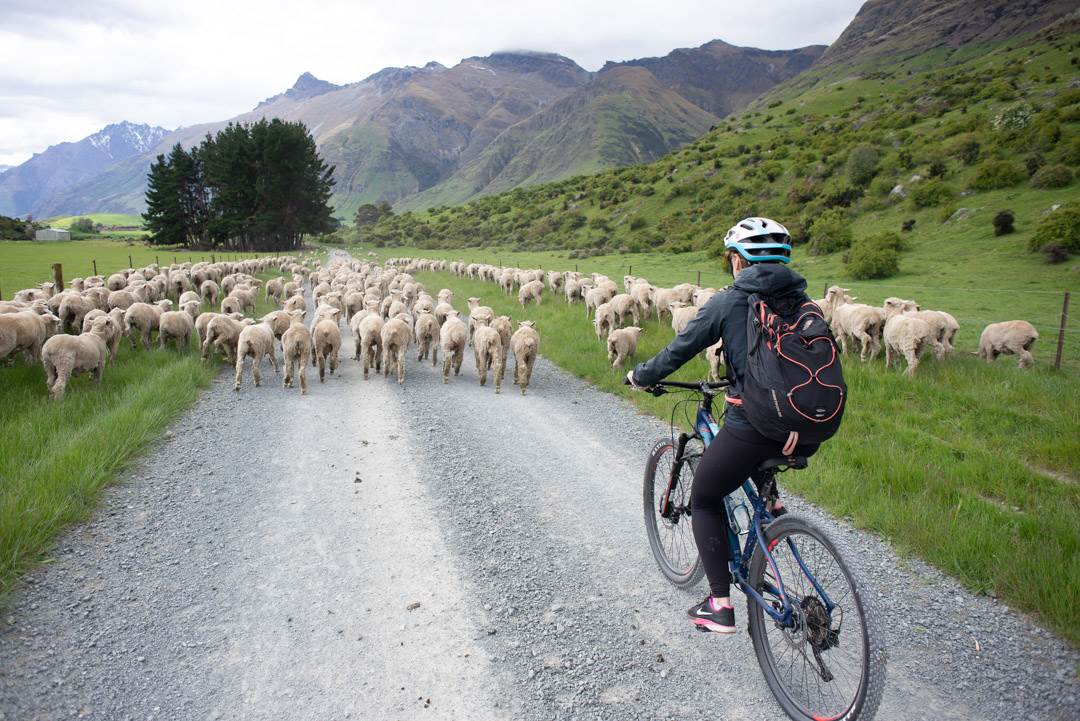 The Station 2 Station bike ride in Queenstown is a 14km trail along one of the most beautiful and least ridden mountain bike tracks in Queenstown, New Zealand. In this blog, I’ll share our experience and tips to enjoying the best Queenstown bike tour!

Along the road that winds its way along the shores of Lake Wakatipu from Queenstown to Glenorchy, you can take in the spectacular views of Queenstown’s surrounding landscape. However, there are a few places these roads don’t go, and in my opinion, this means you miss some of the best views.

The places I’m talking about are at the two farm stations that sit opposite Queenstown across Lake Wakatipu – Mount Nicholas Station and Walter Peak Station. These two stations sit in one of the best areas to view the lake and its surroundings.

Both Bailey and I have been to the Mount Nicholas Station on a farm tour previously so we already knew just how beautiful it is. So, after we found out about the Station 2 Station bike ride in Queenstown, we knew we had to give Queenstown’s best bike tour a go!

So, here’s everything you need to know about the best Queenstown bike tour – the Station to Station bike trail.

What is a station in New Zealand

The Walter Peak Station and Mt Nicholas Station are Merino wool farms. For this reason, on your bike tour, it’s almost guaranteed you’re going to see some Moreno Sheep running around as well as lots of other farm animals!

About the Station 2 Station bike trail?

The Station 2 Station bike ride tour in Queenstown is a self-guided bike tour that starts right in town at the Steamer Wharf. From here you catch the Southern Discoveries Spirit of Queenstown Scenic Cruise with your bike to the Mount Nicholas High Country Farm.

Once there, you will be guided to the start of the bike trail and off you go! From here, you follow the one gravel road and marked signs all the way to Walter Peak Station about 14 km away.

Along the trail, you can stop where you please while riding as fast or slow as you want. Once you arrive at Walter Peak Station you will then board the TSS Earnslaw (an original 1930’s coal-powered steamship) and take another scenic cruise back to Queenstown!

You have around 2.5 hours to complete the cycle trail which is usually plenty of time. There is a lunch option that cuts off an hour of your cycle-time but there is a shortcut for those who choose to take this option.

1. Scenic cruise to the farm

On the way to the Mt Nicholas Station, you’ll be able to sit back and relax on the Spirit of Queenstown Scenic Cruise as you are guided along Lake Wakatipu learning about the lake’s history and Maori legends. The entire journey is really beautiful especially once you reach the bend in the lake and you can look out at Glenorchy and the Humbolt Mountain Range.

This part of the tour lasts for around an hour and onboard you can grab a coffee, biscuit or even an alcoholic beverage if 10 am isn’t too early for you.

2. The Station to Station Bike Trail

Once you’re off the boat the world is your oyster! Here Bailey and I could head off on our own along the small gravel road between the two stations.

The views on the ride are amazing! It was that perfect combination of lush green rolling hills, Lake Wakatipu, and of course, the huge mountain peaks as a backdrop.

It’s not just amazing views that you get to see though. As both stations are active working farms, as we rode along the trail we saw a huge range of farm animals including horses, bulls, cows, and sheep.

Since it was spring we also saw lots of lambs with their mums and a whole paddock of young cows! At one point we had to cross a gate and we got to ride amongst 300 sheep or so – and that’s no exaggeration!

It took Bailey and I around 2 hours to ride the flat 14 kilometers to the Walter Peak Station. This included lots of photo stops along the way!

3. Crusie back on the TSS Earnslaw

On the journey back aboard the TSS Earnslaw, you get pretty much the same views as before, however this time you’re aboard a ship that’s almost 100 years old! On the main deck, you can even enter the engine room and see the workers shoveling coal into the heaters.

The TSS Earnslaw is rather slow-moving so Bailey and I took this time to sit back and relax before arriving back at Queenstown to end the Station 2 Station bike ride, Queenstown.

Alternatively, you can rent or bring your own bike along.

How hard is the Station to Station bike trail?

The bike ride is really for all fitness levels and there are two options once you arrive. You can either take the longer path or a shortcut that cuts off a few kilometers.

The trail is mostly flat except for a few parts (but after you go up, you get to go down!) The bikes have different gears to help you get up any hills.

Water – you are provided with a bottle of water for the tour, however, it is not enough. To be safe bring another one per person.

Sunscreen – The New Zealand sun is harsh and with almost 3 hours outside it’s important to Slip, Slop Slap!

Snack – If you don’t opt for the lunch you will need to bring a few snacks with you or buy them either on the boat to the station or on the way back on the TSS Earnslaw.

Camera – Because the views are worth capturing!

Comfortable shoes – Bring shoes you can comfortably ride a bike in!

This bike ride in Queenstown is about getting off the beaten path and taking in some amazing views that few get to see. We loved that the tour was self-guided as it allowed us to enjoy views where and when we wanted.

Once the group set off we were completely alone as everyone went at their own pace. We got to ride along a seemingly empty trail and heard nothing but the sounds of little lambs calling for their mums.

The station to station bike ride, Queenstown is one of the most enjoyable activities we have done in Queenstown and we highly recommend it!

You can book your Station to Station bike ride here online in advacne.

Thanks so much for reading. The Station to station bike ride is a great all-round tour we are sure you’ll love. If you have any questions about the tour or Queenstown/New Zealand in general, leave a comment below.

Also, If you found this travel guide helpful you’ll be happy to know we have tons more on our Queenstown page and New Zealand page.

10 things to do at Skyline Queenstown (Bob’s Peak gondola)

33 Unique Things to do in New Zealand
← Previous
A Unique Celebration: The Hamilton Hot Air Balloons
Next →
Click here to cancel reply.