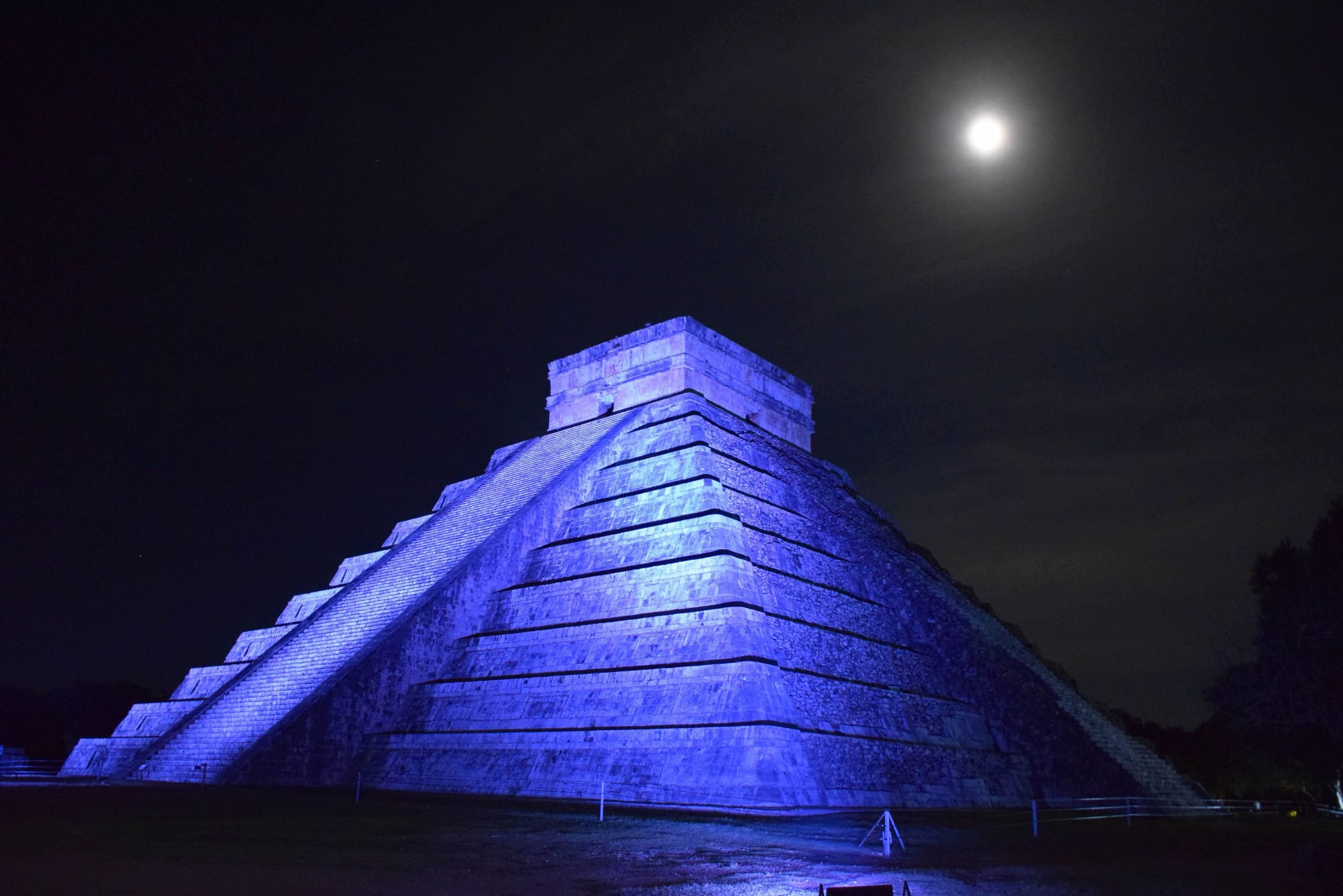 Want a unique experience when you go to Chichen Itza? Consider going at night for the Chichen Itza Night Show like we did! Here’s everything you might want to know about this experience so you know whether it is for you or not!

When we visited Chichen Itza, we decided to explore this new Seven Wonder of the World in a less traditional manner, we bought tickets for the Chichen Itza night show and tour.

It was a risky decision to make as we would only be able to view the ruins at night, missing out on seeing them during the daylight.

It is safe to say, we were blown away.

Walking around the Mayan ruins under the stars and moonlight with a limited number of other visitors was an incredible experience in itself. But then the light show started and added a new sense of entertainment to the “normal ruin experience” we’ve had so many times in the past.

We were quite lucky to have even heard of this option for visiting Chichen Itza in the first place. We didn’t see any advertising or read anything online about the Chichen Itza night show. In fact, it was the morning of our anticipated visit to Chichen Itza that we overheard some chatter at our hostel breakfast table about this option.

You see, I went to Chichen Itza when I was 16 and remember thinking that it was crowded, hot, and boring. We decided to visit Chichen Itza this time mostly for Daniel’s sake of being able to see another one of the Seven Wonders of the World.

I was secretly hopeful that since I am now older, I would appreciate it more than before. That all being said, every other backpacker we had spoken to reviewed Chichen Itza as “okay” or “good”. Any traveler who had visited the ruins of Tikal before said the experience didn’t even begin to measure up.

Ignoring these reviews, we decided to check out Chichen Itza for ourselves and make up our own minds. But when the opportunity of a Chichen Itza night show came up I had to consider that as a more exciting option.

What to Expect from the Chichen Itza Night Show Experience

We arrived to Chichen Itza at 6:30 PM, half an hour before the start time (note that the start times differ in different seasons.) We gave our ID in exchange for an iPod and headphones each.

On these iPods was the electronic tour included in the entry ticket price. This was really neat as we could select our own language and listen as we wanted. Everybody who was coming to the Chichen Itza night show was given one of these iPods. They had about 12 different information clips of about 5 minutes long which corresponded with numbers at each point of interest around the ruins. It was really a self-guided electronic tour.

When we entered the ruins the whole group of people were directed to walk the same route, in numerical order of the information clips on our iPods. The self-guide iPod tour made walking around and exploring the ruins peaceful and quiet as there was little to none chatter among the people and no shouting tour guides with microphones.

The other great thing about the Chichen Itza Night Show is that there is a limited number of people allowed into the site. Although there are still many people, it didn’t seem crowded or overly busy. During our night visit only half of the 500 tickets had sold.

The iPod tour gave information on the significance of various ruins and other historical facts. It spoke about Mayan traditions and rituals all the while ruins were lighting up with different colors.

The main temple, “Temple of Kukulkan”, constantly glowed and remained the main attraction as I walked around in awe.

After about an hour of the tour and exploring, everyone was instructed to take their seats. Seats were set up in front of the Temple of Kukulkan and were numbered. Our entry tickets had our seat numbers on them.

Soon enough, the music started and the main light show began. There was amazing visuals projected onto the pyramid and story being told at the same time. This show went on for about half an hour and although it was only in Spanish, it was incredible.

Related Read:   35 BEST Things to do in Mexico City

Important Info for going to Chichen Itza at Night for Yourself

The Chichen Itza night show is official titled “Chichen Itza Noches de Kukulkan” and the shows runs every night of the week EXCEPT FOR MONDAYS.

This is a ticket only event. Tickets can be bought at the door but you will definitely end up with a much worse seat than if you book in advance. The seats aren’t elevated or anything so if you are in the back your view will be much worse.

Buy your tickets online here. Presenting the electronic copy on your phone is fine. We bought our tickets only three hours before the show started and ended up in the second row. There is no extra charge to purchase online.

453.00 Mexican Pesos or about $22 USD. This is the ticket price and included the self-guide iPod tour and the light show.

Note, if you want to visit Chichen Itza during the day as well, you must buy a separate daytime entry ticket in addition to the 453MXN Chichen Itza light show ticket.

You will need to get to Chichen Itza about 30 minutes before the event start time. The entire event ends about 2-2.5 hours later.

Going on an Organized Tour

Of course, if you don’t want to buy tickets online and get there on your own, you can also book a tour. This is definitely the easier option.

There are a variety of different tours available from nearby tourist destinations such as Cancun. This particular tour departs from Merida and includes a two hour tour of the ruins in the daytime before having a dinner break and returning for the night show!

If you don’t go on an organized tour I highly recommend you spend the night nearby so you don’t need to travel a long distance late at night (see below.)

Where to Stay Near Chichen Itza

Because it is a night show, I would recommend booking accommodation near the site of Chichen Itza itself for the night and then just take a taxi to and from the entrance.

We stayed one night at a really nice hotel which was quite budget friendly at only $30 USD a night for a private room called Hotel Doralba Inn. It was about a 5 minute drive from Chichen Itza and the taxi cost about $3 USD each way.

There are even closer hotels, but they can be more expensive, so if you are looking for a budget option Hotel Doralba Chichen is great, they even have a huge pool and are across the road from one of Mexico’s most famous cenotes called “Ik-Kil”  which we were able to explore the next morning before check out.

Browse all of the hotels near Chichen Itza!

Related Read:   26 EPIC Things to do in Tulum, Mexico (on any Budget)

Other Tips for attending the Chichen Itza Light Show

-buy your ticket online in advance. Busy season tickets will be sold out in advance.

-spend the night in a nearby hotel, it will be expensive and difficult to get to a town or city at 9pm at night.

-while in the area of Chichen Itza make sure to stop by the cenote called Ik-Kil, it is very neat and well worth a half an hour visit.

-bring your own headphones. The ones they supply are not very reliable.

-arrive 30 minutes before the start time.

-bring a piece of ID with you as a deposit for the iPod self-guided tour.

-if possible, try and do the tour with a full moon – it helps make amazing photos.

Do I Recommend the Chichen Itza Night Show?

Absolutely. Some of the recent Trip Advisor reviews say otherwise, but I honestly don’t have a bad word to say about it.

After seeing so many ruins in Latin America, this was a great way to change things up. It was eerie and magical at the same time walking around an ancient site in the dark. An experience I will never forget and definitely one of the best things I did in Mexico!

Traveling more in Mexico? Check out our other Mexico related travel guides!

9 BEST Hotels in Puerto Escondido (for every budget!)
← Previous
Skydiving in Puerto Vallarta - All You Need to Know
Next →
Click here to cancel reply.

Quite impressive. Thanks for sharing.

Glad you enjoyed the post! Thanks for the feedback :)