3 Best Breweries in Bannf and Surrounds 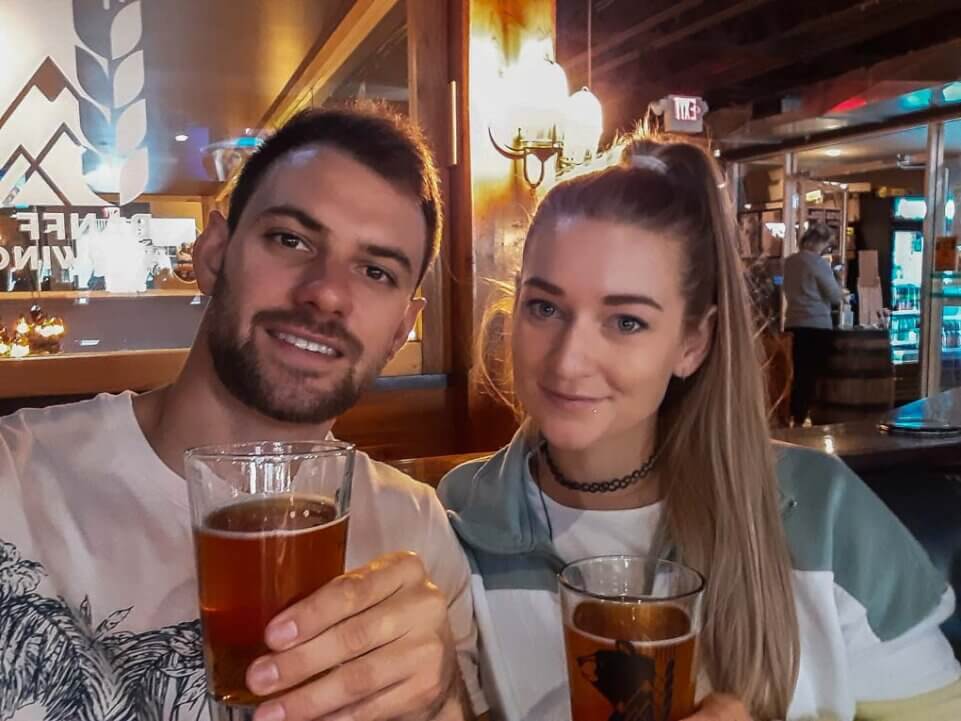 If you’re like me and you love craft beer, then one of the first things you’re going to do when you get to Banff is to visit the best craft breweries. Checking out Banff’s breweries is one of the best activities in Banff – perfect in any weather!

I’m lucky because my partner Bailey also loves craft beer so it wasn’t hard to convince her to try them all! With that said though, I was faced with one problem when I first arrived, there was only one brewery in Banff town!

Now, I know that’s better than none, however, what I found out is that there are actually a few more breweries in Banff – they’re just not all in Banff town specifically. With a good nose and some local knowledge, I managed to find two more craft breweries nearby.

But for first-time visitors to the area, you may not know exactly where to look.

If that sounds like you then this blog is perfect. In it, I’ll share how to try craft beer from three breweries around Banff and lots more tips for my fellow craft beer lovers!

First up is, of course, the Banff Ave Brewing Company! This is technically the only brewery in Banff but nonetheless, the craft beer here is delicious! The brewery is conveniently located on Banff Ave but it can be a little tricky to find as it’s on the second floor.

Luckily though, Banff Ave Brewing has a small shop below selling merchandise and take home packs where the employees will point you in the right direction to the bar and restaurant upstairs. Once in the brewery, the world is your oyster…

One thing I really, really love about Banff Brewing Co. is their huge range of beers! To be exact there are 12 delicious beers to choose from and the variety is so vast there really is a beer for everyone. Personally (yes, let’s hear about my favs!) I love the Head Smashed IPA, Pond Hockey Pale Ale, and the Strawberry Pint’a Colada (a golden ale brewed with strawberries that actually tastes like a strawberry Pina Colada!)

The brewery also serves really good food consisting of many Canadian pub classics such as nachos, burgers, and poutine (if you’re not Canadian you may need to google that last one.)

Regardless of what beer you love, you’re bound to find it at Banff Ave Brewing Company. Don’t get stuck there too long though, you need to move on as there are many more craft beers to try around Banff!

Canmore Brewing Company is one of my favorite breweries in all of Canada. It’s the one craft beer I drink on a regular and seek out at local liquor stores. Their brewery is located at the Railway Avenue shopping complex in Canmore. Although not the most ideal location to get amongst Canmores cracking atmosphere, the beer is brewed on-site which I love.

When it comes to the selection of beers theirs isn’t huge, but what they do, they do well. The Ten Peaks Pale Ale is a favorite of mine as well as the Misty Mountain Hops. There are three other choices on their regular taps but they also do seasonal taps so there’s always something new to try.

As for food, well, they do lack in that department and for the time being, you can only get snacks such as savory pies, pretzels, and nuts. The brewery does also run tours, however, 2020 hasn’t been the best year for group activities so they have been suspended for the time being. If I were you, I’d check back before your visit to make sure.

Canmore… it’s technically not Banff but when it comes to trying craft beer I wouldn’t let a measly 18-minute drive hold you back. In fact, the best part is the next brewery on our Banff breweries list is also in Canmore – that’s a two birds with one stone kind of deal!

Last but certainly not least is Grizzly Paw Brewing. This small brewery was the first in Canmore and they actually have two locations. The first is the most convenient to visit and that’s on the main street (8 Street) of Canmore. Here, you can try many of their beers including one that’s still brewed in that location.

The other location is a little further out on Old Canmore Road. Funny story actually, I never knew this location existed until I stayed at the Coast Canmore Hotel across the road – talk about a handy location! Anyway, this location is much bigger than the one in town and where most of their beer is brewed nowadays.

Both locations serve food although I’ve only eaten at the one on 8 Street. Their the burgers are delicious and I’d say stopping in for a burger and a beer is definitely one of the best things to do in Canmore!

As for my favorite beer, well I really loved their Grumpy Bear Honey Wheat and the entire Summit Range (which is made up of three ales.)

Now I know we’re all here for the beers, but if you’re bringing someone along who doesn’t love beer then Grizzly Paw Brewing is a perfect choice. The reason? Well, they actually sell homemade cocktails in a can! These include a Mountain Mule and a Gin Squeeze! Although Bailey loves beer, she couldn’t resist trying the cocktails too!

Related read: Visiting the Grizzly Paw is awesome all year round! With their indoor fireplaces, it’s a cozy place to have a beer and one of the best things to do in Canmore in the winter!

The Banff Craft Beer Festival is widely considered the most beautiful beer festival in the world. Held every year, the festival exclusively showcases Alberta crafted beers from over 40 vendors. It’s safe to say you won’t run out of beers to taste before you run out of steam!

The festival is a really fun event and if you’re a beer lover like me then I’d add it to your Banff bucket list – especially if you live in Canada. In 2020 the festival will run between November 26 – 28 at the Cave and Basin National Historic Site.

Of course, every year the dates change slightly but around mid-November is when it’s usually held. This year I’ll be going, so if you are too, be sure to send us an email!

Although there is only one true Banff brewery, the surrounding breweries in Canmore are a great addition for those who want to try some of Canada’s finest craft beer. With three to choose from and try, you could really make a day out it (just be sure to start in Canmore if you’re staying in Banff or have a designated driver!)

Thanks so much for reading. If you enjoyed reading our guide to the best breweries in Banff then jump over and check out all our Canada blogs or the related articles from Banff below!

How to spend Christmas in Banff

Guide to Visiting Banff in Autumn

Most Instagrammable Places to Visit in Banff