Things Best to do in Leon, Nicaragua 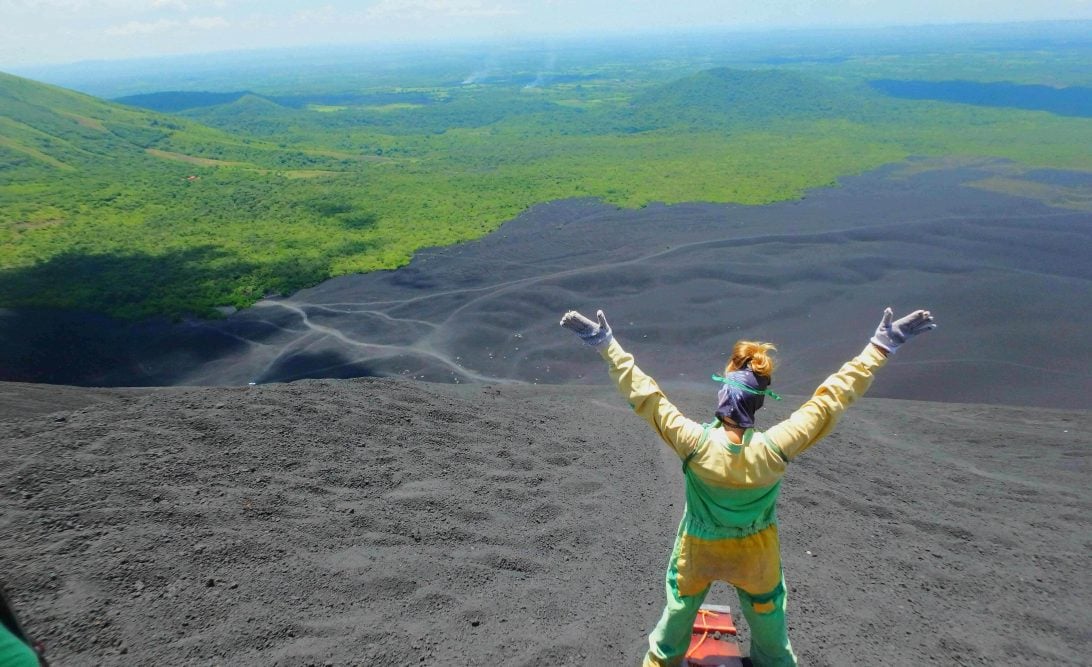 The Best Things to do in Leon, Nicaragua

We planned our trip to Leon, Nicaragua to do the one thing every backpacker goes for – the volcano boarding! Sandboarding down the active Cerro Negro volcano is advertised as an adrenaline filled activity that can only be done in Leon. It sounded like another adventure, so we jumped on a chicken bus from Granada to experience some of the thrills for ourselves!

Little did we know, Leon was actually a pleasant city that grew on us after a day or two, and on day five we were sad to be leaving. Here is our guide to the city including the best things to do in Leon, Nicaragua.

The Vibe in Leon, Nicaragua

Arriving in Leon, Nicaragua I was bombarded by a group of peddling bike style tuk-tuks all offering their service and speaking their best broken English. I wasn’t surprised, I mean, there has not been one bus station (if you can call a slab of concrete in the middle of what feels like a market a “bus station”) that has felt remotely organized or peaceful.

I didn’t expect Leon to be any different. So with sweltering heat combined with the offer of a $1 USD each ride to our hostel we jumped in and were off.

Surprisingly, as soon as we exited the bus station, the city was relatively calm for it being a weekday around noon. There were some stalls and shops lining the streets and a few people riding around on bicycles, but next to no foot traffic and no cars. The streets felt somewhat empty in comparison to the chaos that was Granada. In those moments, riding around in the tuk-tuk, I felt that Leon may be a place we could stay awhile.

Related Read:   Things to Do in Granada, Nicaragua (and other essential travel info)

Getting to Leon, Nicaragua

From El Salvador – A shuttle may be the easiest option, but it won’t be fun. The most popular company is Gekko Explorer and the journey takes 11 hours. It was super cramped and uncomfortable the entire way. Times are available on their website and you can pay online with PayPal.

Read about our shuttle experience here.

We Considered taking the chicken buses to save money however after doing some research it seems the journey would take 2 days with a layover in San Miguel, El Salvador.

The third option is to take the comfortable Tica bus (coach style bus company) from San Salvador to Managua. Times are available on their website here. Once in Managua you would need to get the chicken bus to Leon which leaves every 30 minutes, they take 1.5 hours and cost $2 USD.
Cost – The shuttle costs $30 USD and the Tica bus is $50 USD

From Granada or Masaya – Catch a chicken bus to Managua from the main Plaza in Granada. From there, change buses to one that goes directly to Leon. Just ask someone for the bus to Leon or listen for someone shouting out “Leon .” No changing of bus station is required and the journey is very straight forward. From Granada, our total travel time was 3 hours and cost less than $3 USD.

There are a few options for hostels and hotels in Leon and I have heard good things about most of them. Many hostels in Leon are “party hostels”, we did enough partying in Granada to last us awhile. While in Leon we wanted to relax and be rested for our day of volcano boarding, so we chose to stay at the peaceful Hostal Colibri.

The hostel was comfortable and spacious and clean. We were around the corner only two minutes from “backpacker alley” but far enough away that it was quiet at night. Every morning we woke to a massive breakfast in the garden while we watched hummingbirds. Total “tranquilo” as the Spanish would say.

You can browse more accommodation options here on Booking.com

Things to Do in Leon, Nicaragua

This is the most popular of the things to do in Leon, Nicaragua. This is the only place in the world where it is possible to sandboard down an active volcano, and it was fun! The half-day tour involves about an hour long drive to Cerro Negro (the name of the volcano) and then another hour and a half walk up the volcano. Yes, you must hike up in order to sandboard down, but it is totally worth it.

The hike up isn’t as difficult as it looks, and my group made quite a few photo stops. There were some great views along the way so bring your camera! Your guide can carry it down for you.
At the top, I looked over the edge where we would be sandboarding down, and was terrified! It looked way steeper than it did from the bottom and it didn’t help that we had to listen to all of the safety advice from our guide, “don’t do this or you could break this.”

After gearing up, I conquered my fear and went for it. It wasn’t scary at all, really fun actually! I had complete control over my speed and when it was over I wished I could go again!

Overall, it was a great day. If you only have time for one thing in Leon, this should be it! We went with Tierra Tours and they were professional, fun, and even gave us free pizza and beer at the end!

2. Go on Top of the Basilica Cathedral

I was expecting this to be the same as every church tower we have climbed before, but to my surprise, the lookout at the bell tower was not the main attraction. You can also walk around on the roof of the cathedral and witness its architecture from this unique angle!

From the different sides of the roof, there were more views of the city. I haven’t been to a cathedral yet that lets people run around on the roof – it is definitely the most unique of the things to do in Leon, Nicaragua. Just don’t break their strict rules or you will be up for a $20 USD fine.

The times you can visit the Cathedral are very limited and you must buy a ticket first and then wait to be let in at a certain time slot. Where you but the ticket is not where you line up. To find the ticket booth face the upstairs entrance and then walk to the left of the cathedral. Keep walking till the corner and turn right the office is just around this corner.

The stairs up/down to the roof are very narrow so they let everyone up altogether after the other group has come down. You are given about 20 minutes on the top, which is enough time. The cost is $3. The Cathedral is closed on Sundays to visitors. 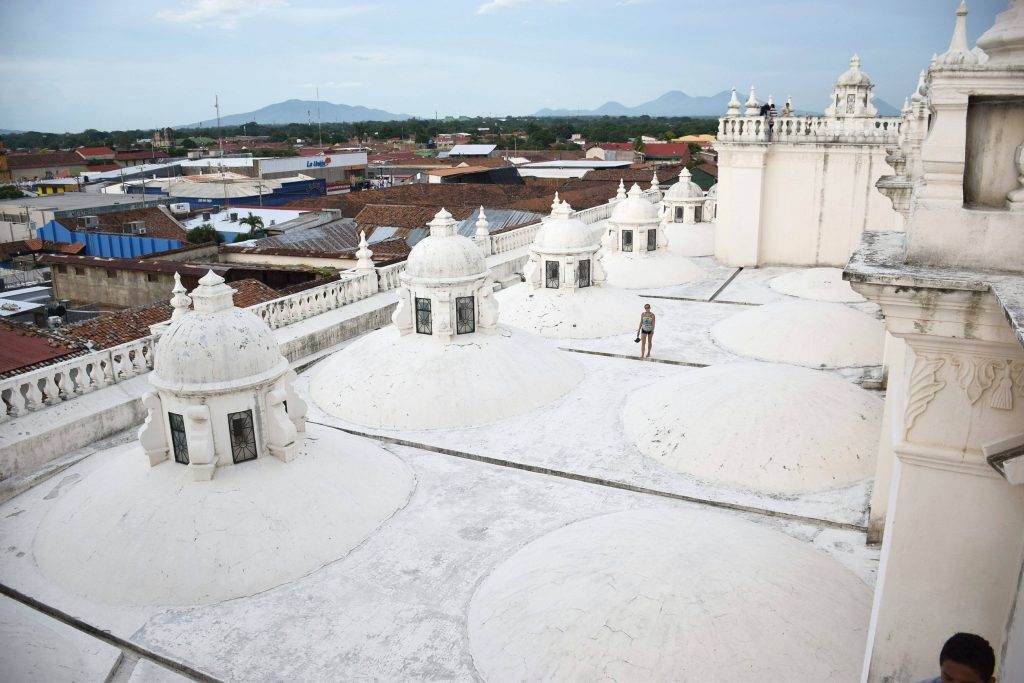 Free walking tours are one of the best ways to touch up on a countries history and culture. The free walking tour in Leon is no difference and was one of my favorite things I did in Leon, Nicaragua. The tours leave at 9 am, 4 pm and 5:30 pm daily and cost as much as your willing to tip. We tipped $10 USD, however, most people only tipped $5 USD.

They meet at the North West corner of the Cathedral, however, you can check this map on their website for the exact location.

Leon felt very safe, we went walking around town during the day with our DSLR camera and had no problems at all. We went to the markets, had some great street food, people watched in the plaza, and checked out all of the colonial buildings. Like I said before, the vibe in Leon is pretty relaxed so wandering around aimlessly was easy. Also, Leon, Nicaragua is so cheap! There are markets with all sorts of bit and bobs to buy for next to nothing, thrift stores with some great finds, and nice stores for shopping.

The cheapest beers we have seen in Nicaragua are in Leon, 50 Cordobas for a liter of bottled beer (less than $2.) Yes, we consider drinking beer one of the best things to do in Leon, Nicaragua. Being on a backpacker budget we must choose our drinking binges carefully and the price in Leon made it any easy decision.

We liked the restaurant called Via Via as it was cheap and popular for both locals and backpackers. A pool table with live music made for a great night out. Also, don’t forget to ask for their food specials as sometimes the promotions are really good value.

6. Go to the Telica Volcano

We didn’t get a chance to do this due to being short on time, but we heard it is great! Tierra Tours offers a twilight hike up to the top to watch the sunset and then see the glowing lava in the dark! We also met some people who did a camping tour there and spent one night at the volcano. For those who are very interested in volcanos, this could be a highlight!

Related Read:   Where to Stay in Ometepe (and why this matters)

Overall, sandboarding on Cerro Negro was definitely our favorite of all the things to do in Leon, Nicaragua! The sandboarding alone makes stopping in Leon worth it! However, we did quite enjoy the atmosphere of the city. I think as a traveler it is important not to only rank a destination on the things to do but also the entire feeling of a place. Leon was a great end to our time in Nicaragua and also the perfect transit point for our next country, El Salvador!
-Bailey