The TRUTH About Chicken Buses in Central America 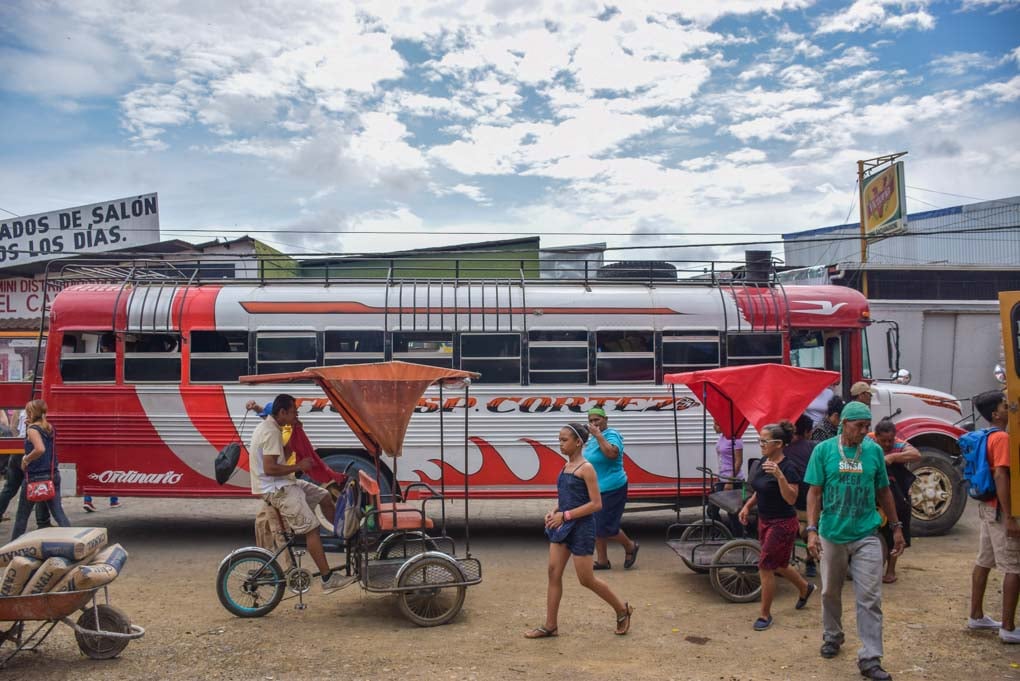 Chicken buses are the local transport in Central America mainly in Guatemala, Nicaragua, El Salvador, and Honduras. In this blog, I share my stories and everything you need to know about this unique mode of transport.

Riding on chicken buses in Central America is a must for any traveler. The experience of rubbing shoulders with the locals is priceless.

For some, this can sound a little daunting, however, after traveling from Nicaragua to Guatemala solely on chicken buses, I must say, you really have nothing to worry about.

In fact, I’d say riding on a chicken bus is one of the best things to do in Central America and an experience I hope everyone has.

With that said, to clear up any worries you have and to describe to you what riding a chicken bus is like, I’ve written this travel blog about the truth of riding chicken buses in Central America.

What are Chicken Buses?

Chicken buses are simply old school buses from the United States that now act as public transport in Central America. Once the buses in the USA get old and rack up lots of miles, they are auctioned off and then driven down to Central America.

Here they are repaired, painted, and then put to work carrying around locals from city to city, and town to town. In places like Guatemala, the paint jobs are very unique and full of color. However, it’s common in Nicaragua to find school buses left almost completely original. If you lived in the USA, you may even ride the bus that you took to school back in the day!

The chicken buses are usually independently owned and the drivers pay fees to drive certain routes and use bus stations.

Because they are independently owned the fares are super cheap. In fact for a local, a ride from say, Rivas to San Juan del Sur will cost around 20 cents. As a tourist, you are usually charged around $1 USD for the same route.

But why call it a chicken bus??

They’re called chicken buses because they used to very often carry farm animals around – mainly chickens. On a trip to the Ruta de Las Flores in El Salvador I was luckily enough to see an animal on a chicken bus.

It wasn’t a chicken, but a turkey!

It sat in a man’s bag really patiently and he even put it in the bag storage above the seats! The turkey sat there relaxed as if he’d done this before!

Sadly, it’s most likely he was heading to the family lunch and was to become the main course.

Chicken buses aren’t comfortable, air-conditioned (other than having the window down), and they’re often dusty and overcrowded. However, this unique way to travel is loved among travelers for the cheap fares and authentic experience!

Related Read:   8 Best Places to visit in Nicaragua (and 24 Fun Things to do!)

Chicken Buses – The Day I Fell in Love

As I gazed out the window of our chicken bus enjoying the beauty around me I took some time to be thankful for where I was. Traveling does that to you. It makes you appreciate the small things and today was the day I fell in love with a bus system!

You see, during my time in Central America I began to really love the local buses unique to Central America. These were known to travelers as “chicken buses” largely due to the fact that it’s not uncommon for animals to be transported on them.

They were old school buses from North America that blew clouds of black smoke and sounded like today was the last day they’d run. Old stickers from the United States still resided on the walls and roof while the names of kids were scratched into the seats. In places like Nicaragua, the windows were never closed, for they were the lungs of the bus and the only thing standing between the passengers and heat exhaustion.

The drivers were calm and rarely spoke, rather they turned to the fan that clung above them. That fan (still likely the original) saved their sanity from the blistering heat.

On the bus, two other men were in charge of the community of people on the bus. They had the job of collecting money from passengers while also screaming out both the front and back doors in a seemingly frantic attempt to attract more passengers.

There was no limit to the number of people they would take and often the buses would end up overcrowded and shoulder to shoulder in the aisles.

At all the stations, mobile vendors would enter the buses. They walked the already crowded aisles selling food and snacks. Often passengers would become collateral damage as they pushed and shoved their way to the back of the bus in search of a sale.

The types of food was endless, although, one type caught my eye. They were small clear bags filled with a piece of fried chicken, white rice, and a tortilla wrap. The bags were blown up with air, acting like a protective layer like a large single bubble from bubble wrap. This was Central America’s very own fast food!

This crazy bus system that was chicken buses could only work in places like Central America. No matter how overcrowded the bus was or how many times people squeezed past others invading more than their personal space, the vendors would continue to get on.

They seemed to respect each other’s right to make a living and understand their personal comfort was not worth a person’s livelihood. They simply smiled at each other and often laughed at the large beads of sweat pouring from their faces.

This way of transport was not the comfiest but it was authentic and I loved it!

This is actually an interesting question to answer that depends on a lot of factors. For the most part though, chicken buses are safe and after riding about 30, I left Central America without a bad story to tell.

The below info isn’t intended to scare you off riding a chicken bus… I want you to! But it’s important to share the truth and that there are some risks (as with everything in this world.)

There is a dark side to chicken buses, especially in Honduras, Guatemala, and El Salvador. You see, in general, these countries are dangerous in areas, and often, chicken buses pass through dangerous neighborhoods. For this reason, robberies sometimes occur and because chicken buses stop frequently they are easy targets.

Also, chicken buses are a lucrative business and often the drivers are required to pay bribes to gangs in order to drive a specific route. On odd occasions, drivers don’t pay, and this can end in tragedy.

Luckily for you, a tourist, you’re unlikely to fall victim to these crimes. On tourist routes, the roads are safer, especially in Nicaragua where crime isn’t a huge problem. Also, the most dangerous area of these countries is the poor neighborhoods in large cities such as Guatemala City. It’s extremely unlikely you’ll visit these areas and as such, almost all travelers have no issues on chicken buses.

In my opinion, if you travel during the day and stick to touristic routes, it is extremely rare to get robbed on a chicken bus – and in that sense, they are safe!

This is likely the biggest worry with chicken buses. With no seat belts and drivers who are overconfident in their driving ability, accidents can happen.

Luckily, most buses are slow and with the constant stopping, the drivers struggle to do high speeds for long periods of time. Also, the biggest danger is usually for the other driver. School buses are built tough, they’re heavy and long. Small cars definitely come off second best in an accident.

Tips to Prepare for Your First Ride

When it comes to popping your chicken bus cherry, you’re likely going to be nervous. I get it, I was too. However, with these few tips, you’ll be more prepared than a local!

Bring water – Central America is a hot place and on the buses, heat exhaustion is a real threat if you’re not prepared. Bring a bottle of water always!

Don’t wear a white shirt – Chicken buses aren’t always clean. On top of that, with all the windows down dust flys around everywhere on some routes. Save your nice white shirt or going out clothes for another day!

Be prepared to stand – Chicken buses end up packed to the brim. If you’re on last then you’ll be standing!

Bring a bag cover for your backpack – Your large back will get covered in dust and dirt – even grease on some occasions. If you have a backpack cover, put it on!

Be prepared to hold someone’s baby – This actually happened! On our way through El Salvador, a lady handed Bailey her baby while she tended to her other child. Chicken buses are a community event so be prepared to participate!

Bring small change to pay your fare – No one likes a rich gringo paying with a $100 bill. Have small change, it makes it easier on the driver and easier to get your change.

Allow an extra hour on your route – It’s two hours from Rivas to San Juan del Sur but allow three. Chicken buses have some random stops and depending on the day, can run very late!

Related Read:   The Best Places to Visit in Central America

Chicken buses are iconic to Central America. They’re more than a cheap mode of transport, they’re an experience and one I hope you choose to have at least once in Central America.

And why not? Take a short trip. Love it or hate it, this is how the general population of Central America travels. It’s their way of life and if you refuse to live that at least once why travel at all!?

Thanks so much for reading! I really hope you enjoyed this short guide to chicken buses in Central America. With the tips and info above, you’re ready to tackle the unique experiences chicken buses can through at you!

If you found this blog helpful, then be sure to check out all our other Central America blogs or these related articles below!

The absolute best things to do in Ometepe

Guide to the Acatenango Volcano Hike

8 Best Places to visit in Nicaragua (and 24 Fun Things to do!)
← Previous
COMPLETE Guide to Visiting the Moeraki Boulders in New Zealand
Next →
Click here to cancel reply.