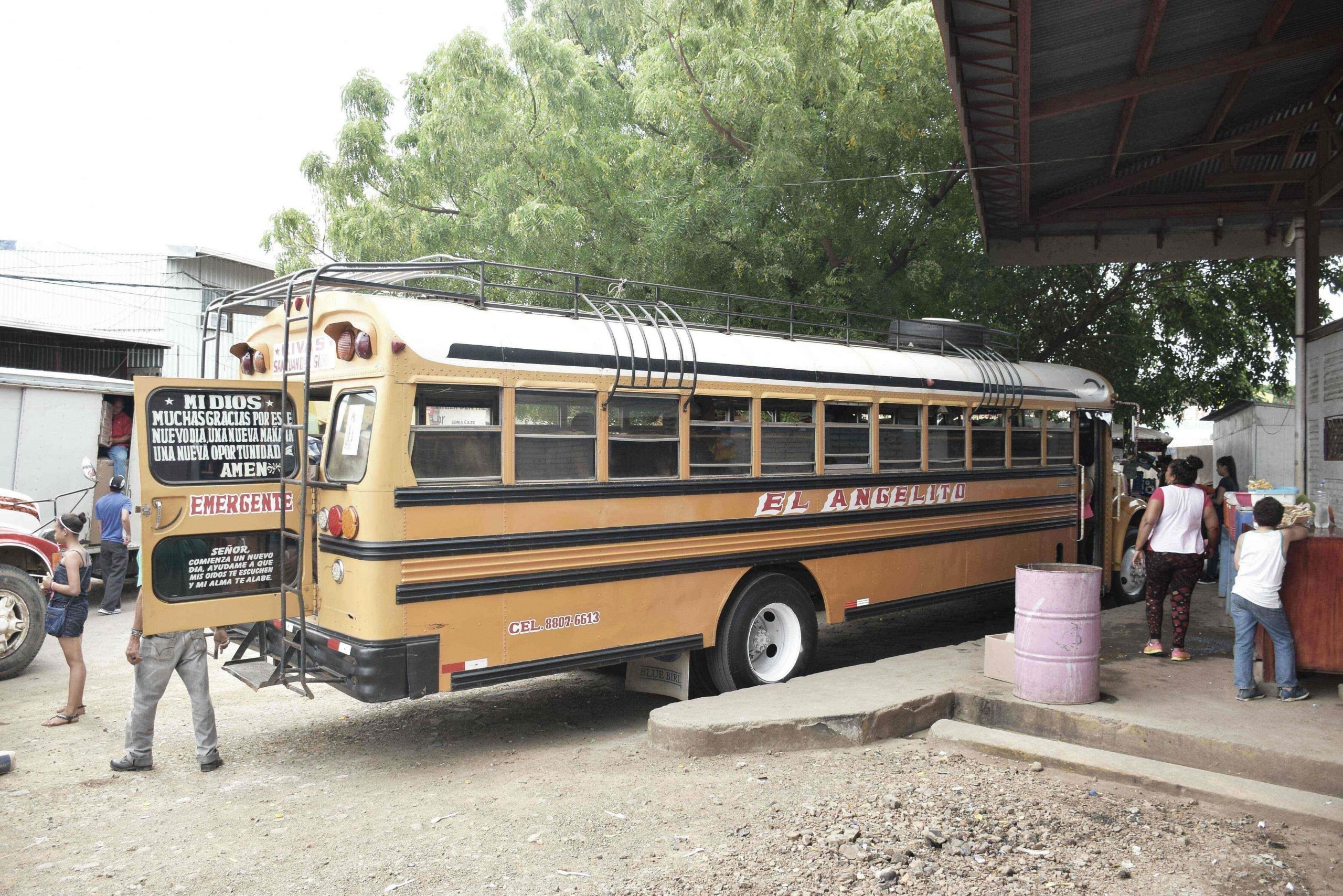 Since entering Central America we had the impression that long night buses were behind us, left in expansive South America. We would now be able to cruise down the road to our next location in only a few hours.

You see, South America was massive and the long journeys only made sense at night – on long-haul buses (sometimes over 24 hours.) But from now on the countries in Central America were small and the journeys would be completed during the day on chicken buses.

Currently in Leon, Nicaragua, we had El Salvador in our sights. To our first destination, El Tunco, the journey would take two days by chicken bus or 11 hours by shuttle.

This lead us to make the decision to take a shuttle. Time was against us and we were in real need of some time at the beach. Little did we know at the time, this would lead us on one hell of an adventure crossing one of the most dangerous border routes in Central America in the middle of the night!

About our Journey from Nicaragua to El Salvador

Our shuttle from Nicaragua to El Salvador involved crossing through Honduras. This part of Honduras is a notorious drug trafficking route and it’s well known to be a dangerous area.

We had picked the cheapest shuttle with a small company that left at 8:30 pm. Our thought was that we would make it through Honduras before it got past midnight, which we heard was a dangerous time to cross this border.

So, we packed our bags and left our hostel for what was supposed to be an easy journey to El Tunco, El Salvador.

Over the course of the next few hours, his arrival times began to change every 30 minutes. He seemed to uncontrollably chuckle to himself at every update he gave us. Like really?

When the bus did finally come some 2 hours late, the task of fitting everyone inside with our bags took another hour. The bus was overbooked and even though this is a “well-established” company the fact that everyone had bags seemed to catch them off-guard. The drivers stood around confused for the first 30 minutes and simply gazed at the bus.

I watched nervously as a young Nicaraguan man called Jose tied the last knot holding our bags in place on the roof. It took Jose several attempts as the rope continued to gain slack after he tied it off. I saw a nervous panic in his eyes as up to 12 people all watched him try to secure our bags for some 30 minutes.

Jose knew the roads were bumpy on the route and losing one of our bags would not help this already restless group. I was sure at least one bag wouldn’t make the 11-hour journey, but I let fate decide and we all got ready to go.

It was now after midnight and a group of 10 travelers piled into a van made for 8. Like Tetris blocks, we all moved into place. Every movement became precise and once in place, it became impossible to move.

The First Border Crossing into Honduras

The journey had begun and despite the rough start, spirits were high. We headed for the Honduras border and 3 hours later we made it, our bags still held tight with the complex but dodgy rope system used by Jose.

The border was empty. It was 2 am and only a few stray dogs wandered the streets.

I had been warned about the area in Honduras between Nicaragua to El Salvador. Honduras is well known for its violent robberies and a high homicide rate. In fact, San Pedro Sula, the capital, has the highest homicide rate in the world! This with other recent incidents in the area (including a tourist bus robbery which ended with travelers having bullets fired over their heads while tied up had tensions high) made me nervous about the upcoming journey.

Once we had our passports stamped we loaded into the van once again.

As we began to leave the driver told everyone to hold on! We all looked at each other confused as to why? A lady on our van who spoke Spanish asked him.

He told us that it was late now and this section of the road is very dangerous now. It meant we would not be slowing down for anything, despite the road being filled with potholes.

Driving too slowly or stopping allowed an opportunity for robbers or gangs to approach the bus. We had planned on getting sleep, however, after realizing that the danger was real, everyone was wide awake.

Our eyes were glued to the windows, looking for any sign of danger. The road was pitch black and there were no lights. The journey had begun and it was rough. Our driver did his best to keep his speed up and dodge potholes, however, every now and then he would hit one…hard! The fear of rolling a tire off of the rim was a scenario I didn’t want to think about.

As we sped down the road there were people around even at 1 am. As we approached groups of people our driver simply kept going only letting off the horn of the bus to clear the road. He never slowed, and he and his partner were tense the entire time.

It took three hours to reach the border of El Salvador and Honduras. No one seemed to sleep and if they did, it wasn’t well. Even if you managed to put the chance of an armed robbery to the back of your mind, the bus was overcrowded and the roads were unpleasant.

Entering El Salvador at the Border

The sun began its rise over the surrounding hills and with no sleep, I tried my best to answer questions from an El Salvadorian immigration officer. She asked which cities I was going to and in my state, I simply replied “uh, El Salvador.” She appeared confused and then laughed, opened a clean page on my passport, and stamped it.

I had made it! Well, there were still 5 more hours until El Tunco (our final destination) but the hard part was over. The drive was smooth and with the sun out, the freedom of being on the road filled the car.

We laughed and joked about the night that had passed us by all too slowly. We had made a quick stop for coffee before loading into the van one last time all with a newfound skill in Tetris and even greater love for chicken buses.

My Recommendation for Travelling from Nicaragua to El Salvador

I don’t recommend anyone else getting themselves into the situation we did. Although an adventure, this part of Honduras should not be crossed late at night.

Luckily there is a tour company, who despite charging more, leaves at 2 am, This means they reach the Honduras border at around 5 am when the sun is rising and therefore, they make the most dangerous part of the journey during the day. This greatly reduces any risk of robbery as well as having better visibility for the driver on the treacherous road.

You can book that shuttle in advance and it costs $35 USD. Despite being expensive, I believe it’s worth every penny! If we had been robbed we would have lost so much more than that!

Thanks so much for reading! This story is not meant to scare you off traveling this route, but is simply a warning and advice on how to avoid the situation I was in. I really hope you found it helpful and enjoyed reading!

If you found this blog helpful be sure to check out all of our Nicaragua and El Salvador blogs or these articles below!

Best places to visit in Nicaragua

Where to Stay in Ometepe (and why this matters!)
← Previous
ULTIMATE Guide to Surfing in San Juan del Sur, Nicaragua (For ALL Skill Levels!)
Next →
Click here to cancel reply.

What an awful night journey. In 2013 we were traveling around Europe by train. We had made it all the way to Kosovo. From there we would take an overnight bus up to Bosnia Herzegovina. I thought they might drive though Montenegro however it went into Serbia. There was a border with guns and men shouting. They didn't like my passport stamp. They wanted me off the bus in the middle of the night. In the end he shoved all the passports back to me. I tried to rest in the night. At the back of the bus there was a lady that was upset. It turned out without knowing I had been given her passport. When I found out I gave it back to her.

Wow, that sounds like another crazy border crossing! I always worry about gaurds taking my passport from me as you may never get it back!