Home » Blog » Stories » Robbed in Brazil﻿ at Gunpoint – Our Story

Robbed in Brazil﻿ at Gunpoint – Our Story 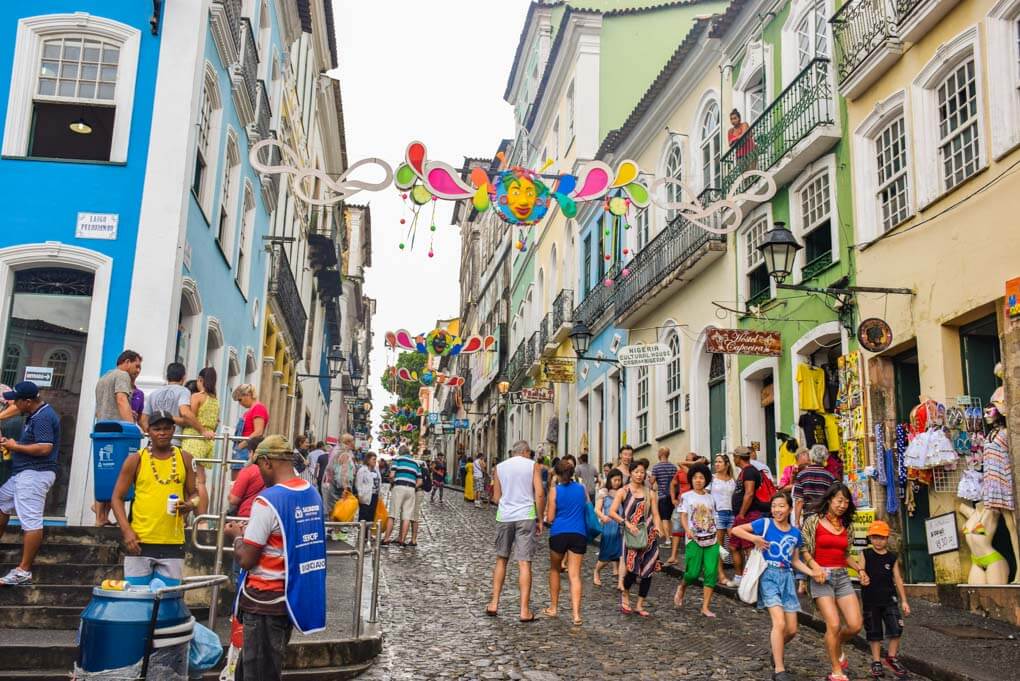 That’s right, we were robbed at gunpoint while backpacking in Brazil. This blog is our story about what happened, how we dealt with it, and how the situation affected our travels afterward.

For the four months we’ve been traveling in South America we have been able to avoid the commonly spoken about robberies – that is, until today.

Today we surrendered all of our valuable things to a man on a motorbike threatening us with a gun.

Here is how it all happened…

Related Read:   ULTIMATE Guide to Potosí, Bolivia and the World's Most Dangerous Mine

It was about 11:30 am on a Monday in Salvador, Brazil. We were walking back from the grocery store to our hostel. It was the third time we’d walked this route during our stay.

Our hostel wasn’t in the most common “touristic area”, but it was in a nice neighborhood. The streets were clean and lined with large houses and apartment complexes with manicured lawns. There was a large mall just down the road as well as plenty of grocery stores and restaurants.

The area had seemed very safe over the last few days we had been staying there.

We were low on food, so we decided to visit the grocery store just around the corner to pick up some things to make lunch at our hostel.

A Stanger on a Motorbike

I was walking a couple of meters behind Daniel when a man on a motorbike pulled up beside me and said something in Portuguese. Feeling confused (I don’t speak any Portuguese) I kept walking. I thought maybe he was just catcalling or asking for directions or something.

Then he called out again, very aggressively, and I looked at him again. That’s when he lifted up his shirt and held the handle of a gun that was strapped to him.

I yelled “Daniel” and grabbed my cellphone out of my back pocket. My assumption was that the phone was what he wanted as he likely saw the cellphone in my pocket when he pulled up from behind me.

I was shaking from panic so I just threw the phone at him – I didn’t want to get within arms reach of him. The cell phone landed near his feet.

At this point, Daniel was next to me then and handed the man our money as he was still holding the gun. The robber pointed at my cellphone on the ground, so Daniel picked it up from that ground and handed him it too.

We only had my cellphone and a few small coins on us (probably about the equivalent of $2 USD.) We only brought a bit of cash with us to the grocery store, and we spent almost all of it at the store!

The robber kept saying something to us in Portuguese, but we couldn’t understand what he was saying. We thought he wanted more money, but we had nothing else to offer on us besides a couple of bags of groceries!

Daniel turned his pant pockets inside out to show he had nothing else on us. I stood behind him with my hands up in the air in a surrender position, shaking and crying.

You must imagine the scene we created – two “gringos” on the side of the road clearly getting robbed. One girl with her hands up in the air to surrender, and one guy with his pockets turned inside out.

I think this scene was something the robber wanted to avoid on such a busy street in broad daylight. He was looking around nervously keeping an eye on what was going on around us.

In the short time all of this had been going on, the street was quiet. However, about a hundred meters down the road was a traffic light that at this moment, turned green and lots of cars started to drive in our direction.

The robber quickly handed us back our stuff and yelled at us as he motioned the “go away” hand signals. He drove off very fast in the opposite direction.

That’s right, after all of that, he gave us our stuff back in the end!

Our best assumption is that he must have been afraid that he was going to get caught. I also don’t think he saw Daniel when he originally pulled up beside me. He probably just wanted a quick and easy cash and phone grab.

Unfortunately for him, we don’t speak Portuguese and this made the whole thing a massive ordeal that he likely didn’t want.

The nighbourhood we were in, as we learned, was full of expats and wealthier Brazilians. If he had wanted to rob tourists, he would’ve headed into the touristic area in the historical center of Salvador.

I honestly can say that in this situation, my overreaction is probably what got us everything back.

We are likely the only tourists in Brazil to be robbed by an armed man only to have our things returned to us.

I feel pretty lucky to still have my phone. I was definitely being complacent in the first place by bringing it with me to the grocery store, but I truly felt safe in this area.

I suppose I have learned my lesson now, these things can happen anywhere to anyone.

The Aftermath and How Travel Changed – Daniel’s Story

It’s not being robbed in Brazil that shook me to the core and it wasn’t having a gun pointed at me.

You see, something else hit me in that exact moment that it was over. That few seconds as we turned away in shock, I turned to Bailey and her face was sad, her eyes ran with tears, and I saw panic in her which I hadn’t seen before – it scared me more than any armed robbery could.

We were both physically okay, we hadn’t been hurt and we still had our valuables, however, in those few short moments our brains and bodies shook in fear and I began to think of the effects it would have on the rest of our travels.

I had no idea how Bailey would react.

I mean, we met another traveler a couple of weeks earlier who after getting robbed in Brazil, left and never wanted to return. Could the same fate await us?

I believed at the time (and even more now) that we had two ways it could go, and from those exact moments, walking away from the gunman I decided I wasn’t going to let it plague the rest of our trip.

We had made it back to the hostel and although we were shaken up, we tried to think positively and even laughed at how the armed robber had given our belongings back. It was naive to think we could both just laugh it off and although now we are stronger because of it, the next few weeks were not the same.

So how does being robbed in Brazil at gunpoint in a foreign country affect you, especially without you knowing it? And how did we move on?

Days after the robbery, it was still fresh in our minds, we didn’t walk the streets the same. We spent our time carefully watching people – suspicious of everybody. I would even getting goosebumps when we would hear the roar of a motorbike cruise by.

We had decided we were going to be fine and this armed man didn’t deserve the satisfaction of affecting our travels.

However, deep down our subconscious didn’t allow us to forget so easily. We had thought that maybe the feeling would pass when we left Salvador, so we crossed our fingers and hoped for a new beginning.

Looking Over Our Shoulders

A week had passed since being robbed in Brazil and we had made it to Rio De Janeiro to celebrate the long-anticipated carnival.

As we left the airport by bus (a way we had traveled before in Rio) I felt as if I hadn’t seen this place before. It didn’t feel familiar (this was our third time in Rio) – I hadn’t looked at the city in this way before.

All of a sudden we saw danger even if there was none and it was sad. We knew we would be fine, but that feeling was more powerful than our rational thinking. But we knew that we couldn’t leave. If we left it would always be there, that fear we had in the back of our minds. We had to stay and let it pass, let time do what it does best.

I remember walking an alley near our hostel a day after arriving in Rio and a man was approaching from the opposite direction, that feeling of panic came over me instantly. This man, although completely innocent, represented what had happened to us. He was similar in build and looks to the man who one week earlier pulled a gun on us.

We could have turned and walked the other way, but I knew that instead, we needed to keep walking. We had to let our fear subside and the only way to do that was to show ourselves that although not as safe as home, this danger didn’t always exist.

As the weeks went on, we began to move on and the feelings of fear became less frequent and the city became familiar again. I thought back to the traveler who left, a guy who let a select few determine his entire outlook on a country of two hundred million people.

As we booked our final buses out of Brazil after two months there (and two weeks since the incident), we knew we could leave Brazil in peace.

So, as you can see, bad things can happen to anybody when traveling. The most important thing is to keep positive and do what you can (as much as possible) to prevent situations like robberies.

Be sure to read our blog about our top South America safety tips, as well as check out the rest of our blogs about traveling Brazil – it was a brilliant country to visit!

Some other blogs of ours that you might find interesting include:

The Truth about Hostels – and Why I Love Them!

How We Afford Long Term Travel

Tips for Surviving Backpacking as a Couple

3 Replies to “Robbed in Brazil﻿ at Gunpoint – Our Story”