Bogota Graffiti Tour – The BEST Thing to do in Bogota, Colombia 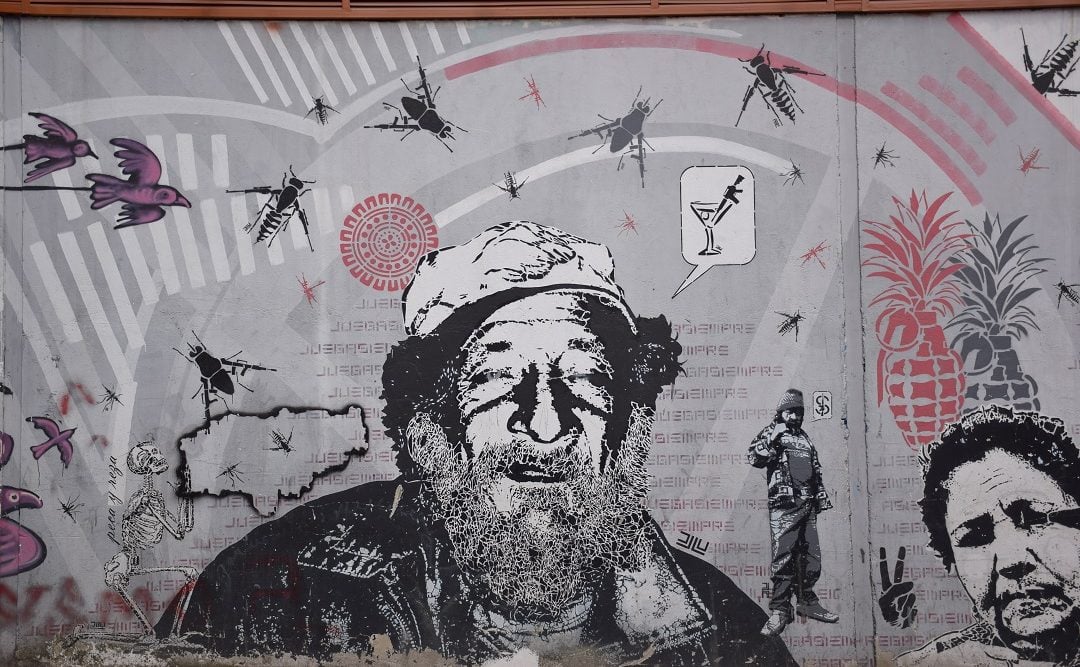 If you’re headed to Bogota, Colombia then there is one tour you absolutely need to do – a Bogota graffiti tour! In this blog, we’ll tell you why a graffiti tour in Bogota is must-do, what to expect, which one to book, how to book, and more!

Bogota, Colombia is a city rich in culture and history. And the best way to learn about all of this for yourself is actually on a Bogota graffiti tour.

Well, the graffiti in Bogota is actually more than what meets the eye. The images represent significant historical and political events in Bogota and really do tell the city’s stories in the most artistic way.

So to me, a graffiti tour in Bogota is the best thing you can do in the city, and in the post, I’m going to tell you all about it including what tours are the best, what to expect, and a whole lot more!

A little bit about Street Art in Bogota

First of all, it’s not actually “graffiti” but rather “street art.” The people who paint these massive murals on the walls around Bogota are artists and most are paid as professionals to do so.

These words are often used interchangeably but just to clarify, when you go on a graffiti tour in Bogota, you’re actually touring the professional street art murals as opposed to illegal graffiti tags of vandalism.

The interesting thing is that while these murals often cost a lot of money, many of the locals in Bogota think that the graffiti that covers the city’s walls are an eyesore. Many even want it to be removed.

However, to some, it’s the only way to express their true feelings of the people and spread a message without censorship from the government.

Graffiti is Bogota is so much more than just a pretty picture and it actually tells stories of history, politics, and even addresses current issues facing the city today. It’s more than just a painting and is something that many people in Bogota are proud to show off to tourists!

Related Read:   Medellin Itinerary: How to Spend 1 to 5 Days in Medellin, Colombia

Types of Graffiti Tours in Bogota

There are a couple of different graffiti tours you can join in Bogota, and below I’ll explain all of your options.

This is the most popular graffiti tour in Bogota. It is free (tip-based) and a really well run tour that I’ve personally done. Most of the time I find free tours to be very average, but not this one. It is exceptional with a ton of information and passionate guides.

The only downside to it is that because of its popularity, the tour groups are very large. Don’t expect a personal experience at all and be prepared to share your guide with 20+ people.

You can find more information about the free Bogota graffiti tour on their Facebook. Also, note that there are other companies offering a similar tour, but I can only speak for this one in particular that I did and liked!

If you want to see more graffiti and cover more ground then a bike tour is the way to go! On a bike tour you’ll be able to visit murals that many people don’t get to see on a walking tour as well as explore more of the city!

This particular graffiti bike tour is very cheap and comes highly recommended by other travelers!

If the large crowds on the free graffiti tour don’t sound super appealing to you, then you can actually book a private Bogota graffiti tour instead! Sure, these are more costly but they do offer a much more personal experience and also last longer!

If you’re really short on time in Bogota and want to do more than just a graffiti tour, you can actually do a combination city tour that will show you some graffiti as well as lots more! This particular tour hits most of the tourist highlights in Bogota in 5 hours including checking out some cool street art!

How much does a Graffiti Tour in Bogota cost?

The Bogota Graffiti Tour that I joined was free! It was a tip-based tour and you could contribute what you thought the tour was worth when it finished. To me, 20,000 – 25,000 COP per person would be a great place to start.

As I have mentioned above though, there are also paid graffiti tours in Bogota available. These tours range in price but expect to pay between $10-70 USD depending on the group size, what’s included, and the tour length.

Where do graffiti tours in Bogota start?

Most Bogota graffiti walking tours start from Parque de Los Periodistas near La Candelaria, at the large statue of Simon Bolivar in the middle. However, this can change depending on the tour you book.

How long does a Bogota graffiti tour last?

Most Bogota graffiti tours last from 2 to 5 hours. The free walking tour lasts for 2.5 hours, but many paid tours go longer than 4 hours.

Is the FREE Bogota Graffiti Tour in English?

Yes, the main company mentioned in this blog who operates the free graffiti tour does it in English.

Where do graffiti tours in Bogota go?

Most of the best murals are located in La Candeleria and downtown Bogota. However, some of the best graffiti artwork is a little bit hidden which is why going on a tour is so important!

Related Read:   21 Fun Things to do in Santa Marta, Colombia (that will make you love the city!)

Is graffiti legal in Bogota?

In Bogota, street graffiti is decriminalized but that’s not to say the police don’t ever dish out their own types of punishment (but you’ll hear more about that in the tour).

Most large murals around the city are legal as the artist will have received permission from the building’s owner. It is illegal to paint on somebody’s property without their permission.

In some cases, building owners approach artists and ask for them to paint their walls. This is common because having a well-done mural on your home or business prevents it from being painted with “tags.” Tags are a form of graffiti that is just words or a name of a person that is most often done illegally.

If a beautiful mural is displayed on a wall then most graffiti artists respect that artist and do not paint over it with tags.

What makes a Bogota Graffiti Tour so special?

The art scene in Bogota is world-class. The city is actually considered one of the top 10 in the world for street art. Bogota features artists from all around the world who came to paint with other local artists. Artists from all over Europe and the USA are featured on these walls and to them, painting in Bogota is a privilege.

The artwork on Bogota’s walls is completed by artists with true talent and the pieces are simply beautiful to look at. However, to me, it was the political and social motivation behind the art that truly told a story of the city and county that no other tour could.

Instead of reading from history books we read from the walls of the city by deciphering images that represent some of Colombia’s biggest issues.

My favorite piece of artwork told a story about the sad deaths of thousands of homeless people killed by the army. Once killed, these harmless, poor men and women of the streets were dressed as soldiers from groups such as FARC (a far left-wing political organization) and handed into the government for a monetary reward. It was stories like this that are told by the people through artwork on the city streets and often left out of history books.

This tragedy is just one of the stories behind one piece of artwork on one wall, and as you venture further on a Bogota graffiti tour, many other stories are told!

Although the message behind the art is important it’s not the only reason this tour is both unique and awesome. With the local guide you can venture places you wouldn’t normally on your own and see a lot more of this city. Plus, your guide should be able to give you local tips such as awesome places to each or things to do!

Aside from visiting some good friends, the Bogota Graffiti Tour was my highlight of visiting Bogota. I found the history and stories behind the art extremely interesting, and well, the artwork is just plain amazing too!

Bogota graffiti tours cater to all types of travelers and in my opinion, have something for everyone to enjoy. It’s a great way to support young local artists and the best way to see another side of the city! I highly recommend joining a Bogota graffiti tour on your visit!

Traveling more in Colombia? Be sure to check out our Colombia Travel Guide, as well as some of our other favorite destinations such as Guatape, Medellin, San Gil, San Andres, and Cartagena! Otherwise, you can browse all of our (many) Colombia blogs and travel guides!

Travel insurance has saved us thousands of dollars many times. World Nomads is a great company to use if you are an adventure traveler like us!

10 Fun Things to do in Olinda & Recife, Brazil