Hitchhiking in Chile: Our First Experience and What We Learned

Home » Destination Guides » South America » Patagonia » Hitchhiking in Chile: Our First Experience and What We Learned 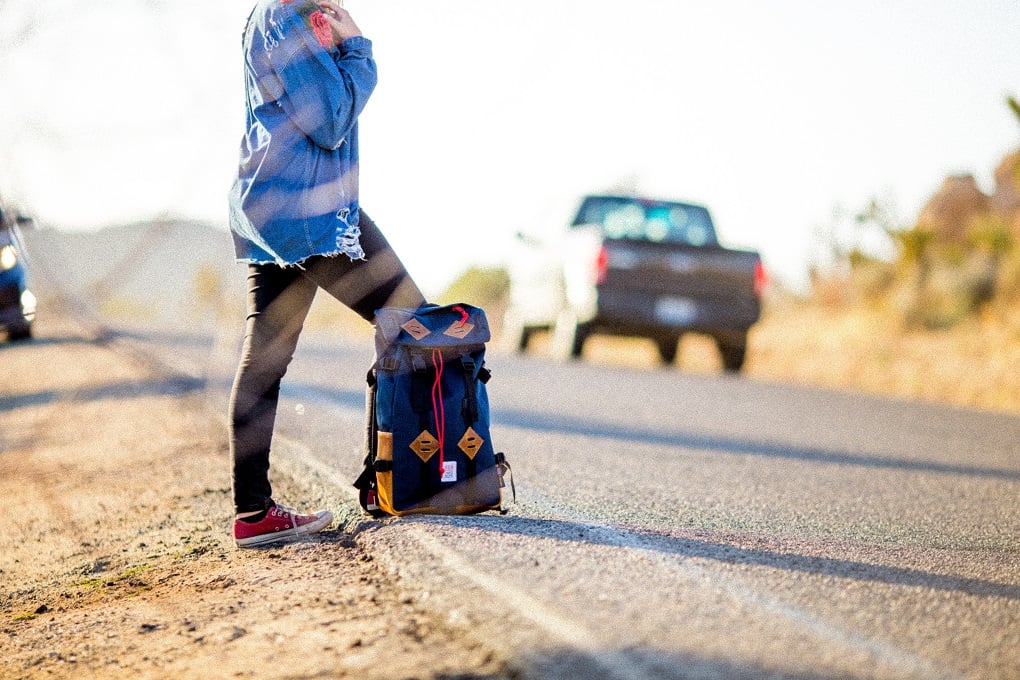 Hitchhiking in Chile was my first time ever hitchhiking and I must admit, I was hesitant to try it. But in my case, I didn’t really have a choice! Keep reading to find out my entire story and what happened, what we learned, as well as some tips for hitchhiking Chile or Patagonia.

Hitchhiking in Chile is a common plan for many backpackers. Those on a tight budget can’t afford the expensive buses in Patagonia (the southern mountainous region of Argentina and Chile) and therefore resort to hitchhiking.

While hitchhiking in Chile and Argentina is a “normal” thing to do, I saw the risks involved and to me, the risks weren’t worth taking. So for that reason, buses were our chosen method of transport around Patagonia!

*Hot Tip: You can book almost every bus in South America on the website Bus Bud. Here, you can compare all of the different companies, prices, and layouts of seats. You can also buy your ticket securely AND choose your seat!

Besides being a little bit pricey, the buses throughout Argentina and Chile were nice! If we splurged a little more we could get a VIP bus that came with a huge seat, a meal, and wine!

It’s safe to say, we were happy with the whole bus situation and had no intention of hitchhiking in Chile or Argentina.

So how did we ended up having to hitchhike?

Our Hitchhiking in Patagonia Story

We started in the most southern area of Patagonia and were making our way north. Once leaving El Chalten, Argentina we decided we just had to go to the Marble Caves. They looked beautiful (and they were) but they were located in a very remote area of in Chile.

What we did find out by speaking to a saleswoman at the bus station was that we could catch an overnight bus directly to the city of Los Antigos in Argentina. From there, we could get a minibus/shuttle across the border to a town called in Chile called Chile Chico. From Chile Chico, there was another minibus to go to the town where the Marble Caves are!

Yes, it is all very confusing, but the point is that we thought that would be able to get there no problem at all! Sure, it was a few buses, but it sounded possible.

Determined and confident with the knowledge of the saleslady, we booked the overnight bus to Los Antigos which was the first leg in our journey.

Little did we know, that the buses are very unreliable.

We arrived around 5 am in Los Antigos. The bus terminal was closed, all of the shops were closed, everything was closed. Along with several other backpackers, we waited outside in the cold for the bus terminal to open so that we could buy bus tickets to continue our journey.

7 am rolled around and the ticket counters started opening. We bought the minibus ticket to get us across the border to Chile Chico. The minibus was scheduled to arrive at 8 am.

But, when it still hadn’t arrived at 8:30 we asked the salesperson at the ticket counter about it. She said that the bus was late, the border just sometimes created delays.

10 am rolled around and the bus still hadn’t arrived. Frustrated, we talked with some other travelers who were going in the same direction as us. Luckily, one spoke fluent Spanish and could communicate properly with the saleslady.

She admitted that sometimes the bus just doesn’t show up.

Reluctantly, we got our money back for the bus tickets and got in a taxi with the Spanish-speaking traveler. We knew a taxi all the way to Chile Chico would be very expensive, but we had no choice!

The taxi drove to the first immigration building where we would get our Argentina exit stamp.

Here, the taxi driver told us to get out.

What!? We needed to get to Chile Chico, staying at the immigration building in the middle of nowhere was not going to help us.

The girl we were with communicated in Spanish with the taxi driver and learned that it was not possible for the taxi to cross the border.

This was terrible news.

We had all of our bags with us and it would be way too far to walk.

There we were, at the border, hitchhiking.

I found it strange that hitchhiking right outside the immigration building was allowed. The immigration officers all watched us and didn’t care at all.

Luckily, we were still with the traveler who spoke Spanish. While we stood on the side of the road with our thumbs out, she approached the people walking into the immigration building. She communicated with them in Spanish asking for a lift.

Many said “no” and after about an hour I was starting to think that we would be there all day long.

As soon as I started to lose hope, a nice older lady agreed.

She only had room for two more people. The Spanish-speaking traveler we were with knew how nervous I was about hitchhiking in the first place and told us to take the ride, she would keep asking and find another one.

It was so nice of her to do this! With our poor Spanish skills at that point in time, we may never have been able to get a lift without her!

The lady who drove us had two teenagers with her. None of them spoke a word of English. Using google translate we communicated with them a little and 20 minutes later we were in Chile Chico. We thanked them profusely and they were on there way.

I couldn’t believe it! What nice people!

First, the other traveler who let us take the first ride, and then with the nice lady who drove us all the way to Chile Chico – we had a very lucky day!

What was a terrible morning with no food, no transport, and a lack of information turned out to be just fine in the end. We were too exhausted from our journey to continue on so we found a nice place to stay the night and enjoyed Chile Chico for the next two days.

What We Learned about Hitchhiking in Chile

We learned that hitchhiking doesn’t have to be a scary experience, and in fact, it is a fun way to get around Patagonia. Not only is it a great way to save some money, but it is useful when buses are limited, which is the case for many places in Patagonia.

Getting over my fear of hitchhiking allowed us to check out some other remote locations that we wouldn’t have been able to by bus.

In fact, we ended up having to hitchhike again a few days later too! There were no buses headed in the direction we wanted to go for a few days, so we had to hitchhike a 3-hour long ride!

A nice businessman picked us up after only having to wait for 10 minutes. He stopped at scenic lookouts along the drive so we could get out and take pictures, and then at our destination town of Chaiten, he showed us around and explained where everything was before leaving us.

We learned that hitchhiking in Chile, or Patagonia in general, is a great way to get to know the locals – even if you don’t speak Spanish (Google Translate is a lifesaver!)

*Safety note: Hitchhiking still comes with risks. It is important to do so only in the daylight hours and with someone else (never alone.) Having a cell phone (with a working sim card) is also a good idea in case you ever need help!

Tips for Hitchhiking in Patagonia

This way you can maximize the number of daylight hours you have to catch a ride. Plus, many people do travel early so you don’t want to miss out on those potential rides!

You need to position yourself on the road that makes the most sense for where you want to go. You also need to pick a spot where drivers can see you from a fair distance away and that there is a safe place for the car to pull off the road.

Use a sign to say where you want to go

This way people where you are going and are more likely to stop.

Smile and wear clean-looking clothes. Nobody wants to pick-up somebody who looks like they will track mud all over their car.

Hitchhike with one other person

You will be safer with a friend. But, if there are too many people hitchhiking together, it reduces your chance of getting picked up.

Don’t feel like hitchhiking? Don’t worry – renting a car in Patagonia isn’t nearly as expensive as you probably think. Use Discover Cars to search for cheap car rentals to enjoy an epic Patagonia road trip!

Related Read:   21 Amazing Things to do in Patagonia – Our Patagonia Highlights

The Truth About Hitchhiking Chile and Argentina

What we learned about hitchhiking Chile and Argentina is that it is actually pretty safe, especially in the region of Patagonia. The people in Patagonia are generally quite wealthy and therefore the risk of robbery is low. They are also proud of how beautiful their home is and want to show it off to the world!

But just to be safe, I would only recommend hitchhiking during daylight hours and there is safety in numbers, so go with a friend! And, always trust your instincts before getting into a vehicle with a stranger.

Besides it being quite safe, we learned that hitchhiking is a great way to experience the culture better and get inside local advice. We have met some really friendly people while hitchhiking Chile and made more memories and stories!

We recently returned to Patagonia, but this time we rented a car! Renting a car in Patagonia gives you so much freedom and actually isn’t as expensive as you might think. Find out more in our blog all about Patagonia rental cars.

Related Read:   Where to stay in Valparaiso – 10 BEST Valparaiso Hotels

We have written a ton of blogs about Patagonia! Many of them are informative and detailed guides to help make the most of your trip. Some of our favorites are:

Ultimate Guide to Visiting Puerto Madryn, Argentina
← Previous
13 Things You Need to Know About Renting a Car in Patagonia
Next →
Click here to cancel reply.