Our Biggest Travel Fails in 2017

Posted on Last updated: May 17, 2022 By: Author destinationlesstravel 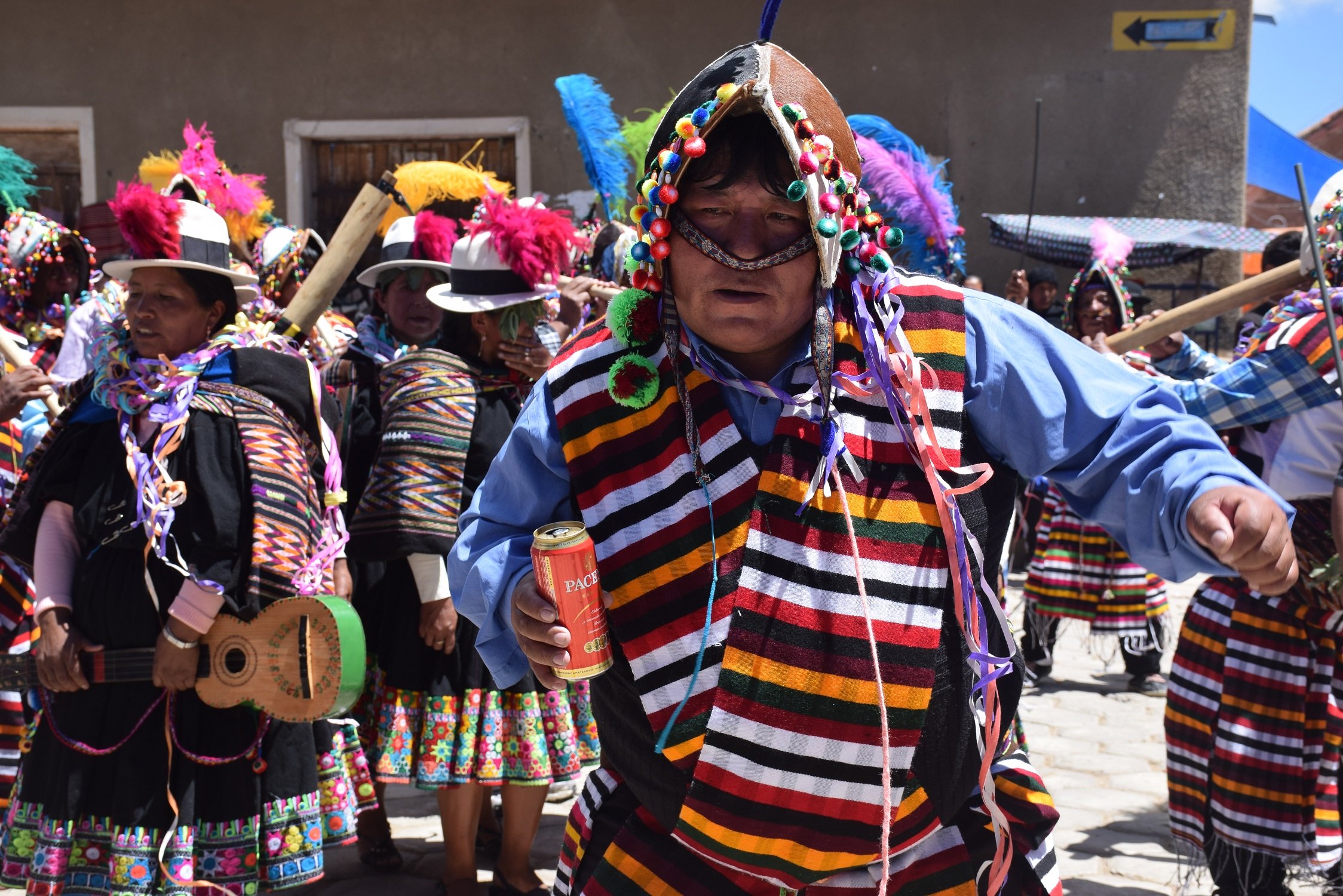 As we celebrate the New Year we tend to reminisce about the year that has passed. People look at their accomplishments, scrutinize their failures, and set goals for the year to come. Daniel and I have done a ton of traveling in 2017, and we have a ton more travel plans for 2018 – so what better way to prepare than to look at our biggest 2017 travel fails! I think it is good to remember that even the most experienced travelers make the biggest mistakes, and that the important thing is that we move on and laugh about them later. My biggest travel fails are also some of my funniest, most memorable moments. So here they are…

We brought in 2017 with a bang watching the fireworks at Copacabana beach in Rio de Janeiro, Brazil. 2 million people all celebrating together on the beach was an amazing experience, but unfortunately, all 2 million people seemed to have the same idea as us which was to head to the nearby island of Ilha Grande in the next few days. We should have anticipated that Ilha Grande was going to be busy during the holiday season, but we didn’t and ended up paying the price (literally) for our lack of planning.

We tried to book a hostel or campground a couple days before leaving for Ilha Grande and had no luck, everything was booked up! This should have been our first clue that getting accommodation was going to be a challenge. Regardless, on January 2 we got onto a packed bus and ferry headed for Ilha Grande. 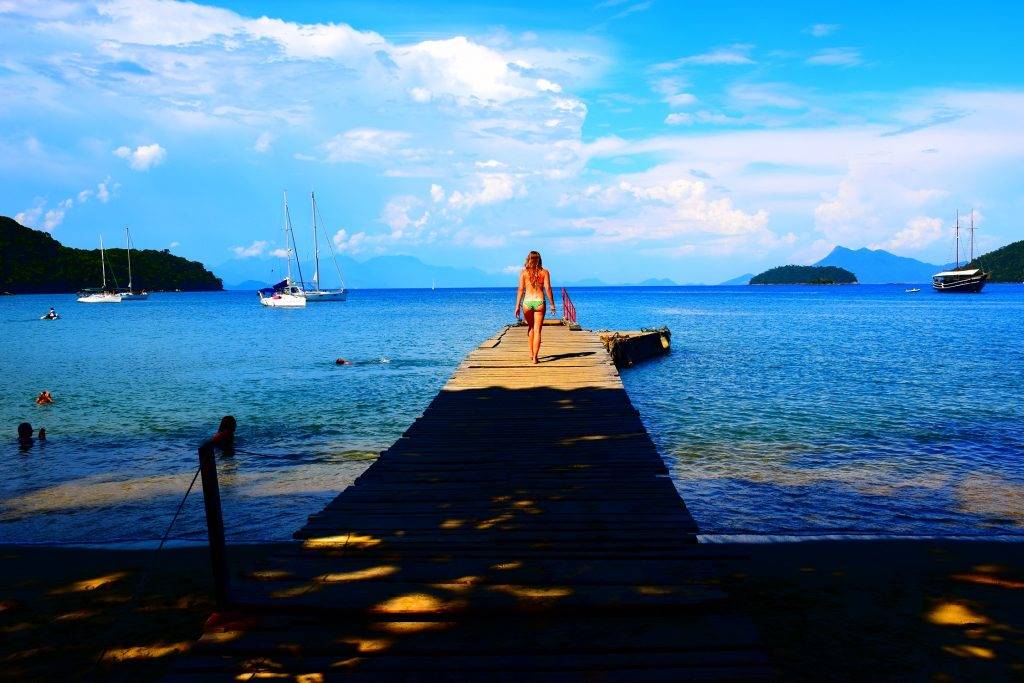 We spent hours walking around the island with our bags trying to find a place to stay that wasn’t full or super expensive. Our only option was camping, and we had no camping gear so we needed a place which could rent us a tent.  We ended up finally finding a place, it cost us each $20 USD a night to share a tent (there was three of us squished into one tent.) 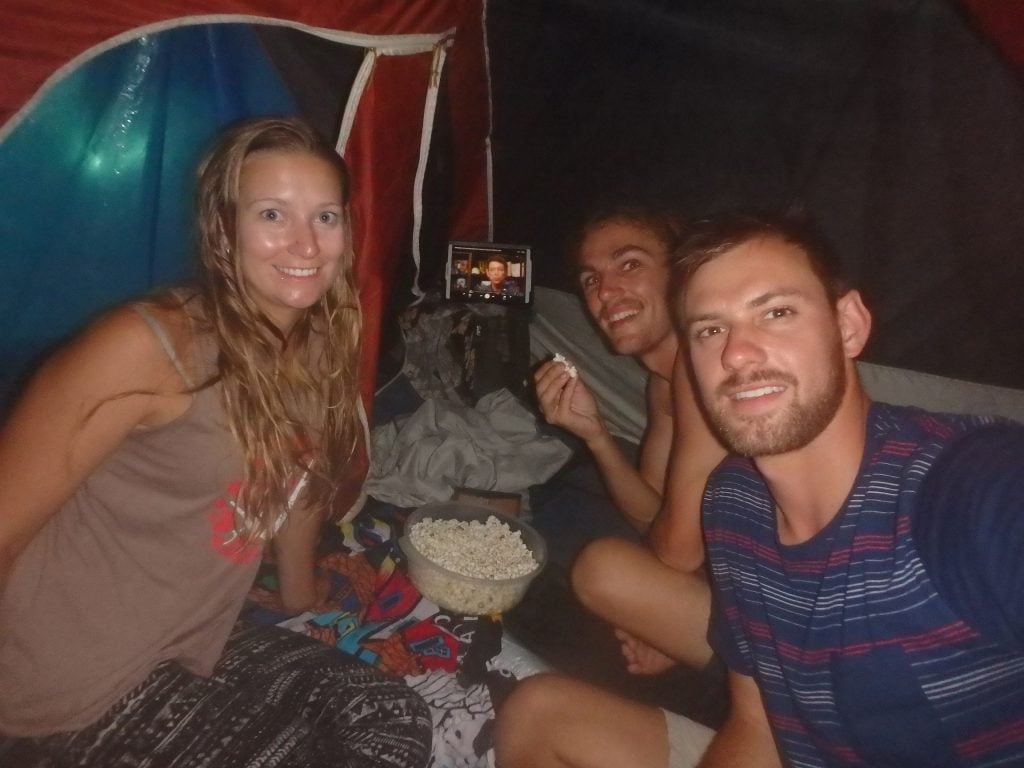 Hanging out in our tiny tent.

This price wasn’t the worst, but it was not worth what we got. It was the rainy season and it thunder-stormed every night, and the tent leaked, badly. The owner of the place put a tarp over our tent when it rained, but it made the tent muggy and sweltering hot in the already 30 degree weather. On our fifth night, after not sleeping for the last four nights, it was extremely hot and raining so bad that I contemplated sleeping on the outdoor kitchen floor (as suggested by the owner when I complained about our sleeping conditions.) The kitchen floor was covered from the rain and all open so at least it would have fresh air, but the dirty leftover food scraps allover the floor deterred me from this option and I crankily climbed back into the tent.

Besides the water and the heat, we also had no mattress for sleeping on. We were given one blanket to use, which we slept on top of. The ground was rock hard. The tents were also setup extremely close together and one of our “neighbors” snored louder than I have ever heard before. One time, in the middle of the night, Daniel actually got out our tent and shook the snoring man’s tent causing him to wake up and quit snoring!

We couldn’t wait to find another place to stay, but there were no other options. We were stuck there for five nights while we tried to book accommodation in our next destination. Looking back on our stay, the sleeping arrangements were awful but the island itself was beautiful and made up for it! Dan and I still laugh when we think about how we had to share a leaky tent with our friend Liam for almost a week! This experience definitely made me ensure we booked accommodation well in advance for the remainder of our time in Brazil during high season. 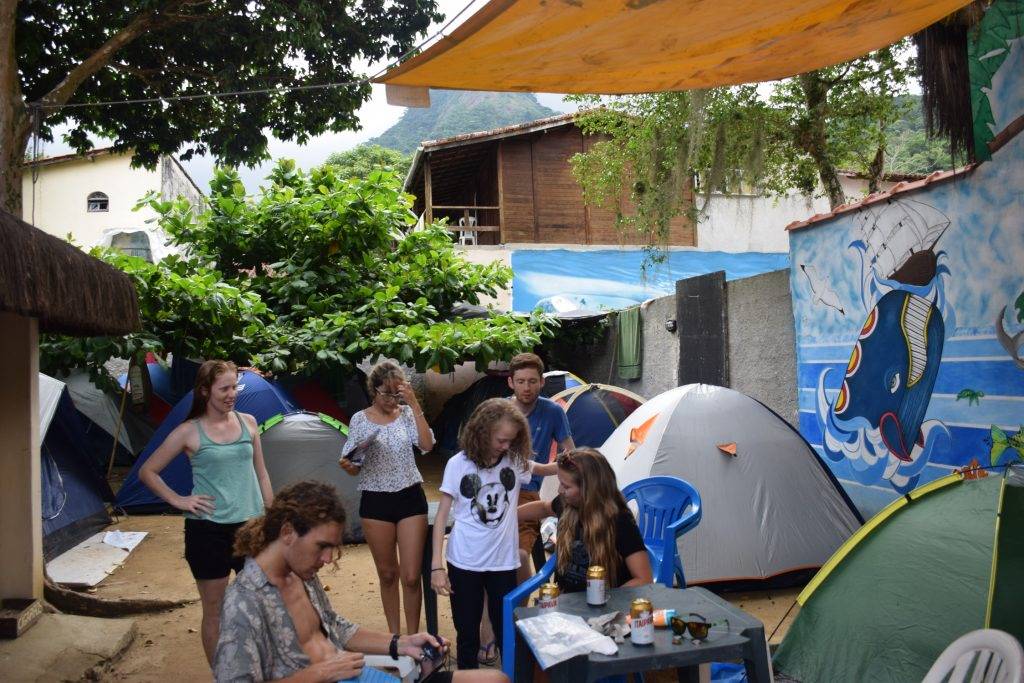 Although the sleeping arrangements were awful, we met some really great people at the campground! (Notice how squished the tents are!)

Planning Fail: Day of the Dead in Mexico

When we realized we were heading to Mexico in October we were excited for the Day of the Dead celebrations at the end of the month! I researched the best places to celebrate and chose the city of Merida. We booked a hostel and then started counting down the days until one of the most unique celebrations in the entire world. We were in Cuba and had booked our flights and Cuba trip around Day of the Dead, which is supposed to start on Oct 31 and go until Nov 2. Our flight back to Mexico was on October 28, giving us enough time to get from Cancun to Merida for the festivities.

Unfortunately, that year Merida celebrated Day of the Dead early on the 27th and 28th. We did not find this out until we arrived in Merida and it was too late. The funny thing is that we weren’t the only ones who made this mistake. The best hostels in Merida were all booked full of backpackers looking to celebrate Day of the Dead. We all talked every day about any festivities going around and organized group outings looking for any type of celebration.

One night a group of about ten of us from the hostel set out determined to find a Day of the Dead celebration. We found nothing. In fact, most bars and clubs were closed as it was a weekday. There were no people dressed up, no parades, no celebrations at all. We then heard that the biggest celebration day was November 2, so this gave us hope! On November 2 we headed to the main graveyard where there is a free graveyard tour every week. But, to our surprise the graveyard was closed! Disappointed, we walked the 3 km back to hostel through the streets of Merida.

We learned while walking back that the people of Merida were in fact celebrating Day of Dead, but in a different way than we anticipated. We could see in through the windows and open front doors of the houses that altars were setup with families gathering around. Altarss are basically table displays used to showcase items, memories, or offerings for their deceased loved ones. When we got back to hostel and spoke to one of the workers about it, she told us that actual Day of Dead rituals are within the home among family and friends. We learned that the parades and parties we see on TV are less authentic and that’s why in Merida the parade happens before the official Day of the Dead, to allow families to celebrate on their own and respect the dead on the correct days. 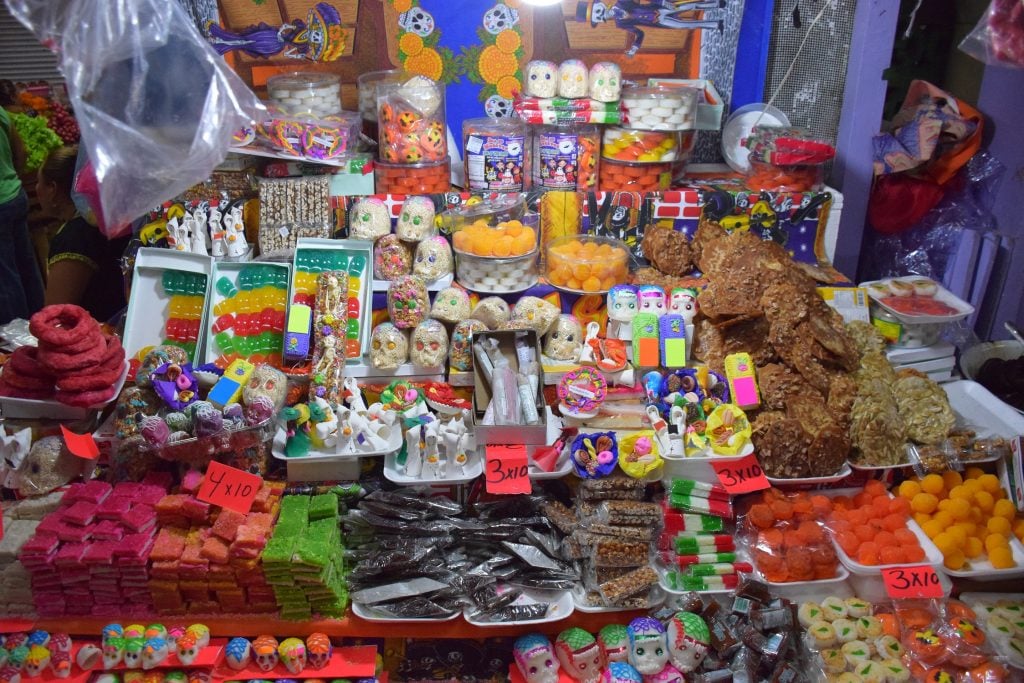 A street stall selling items that people use on the altars for Day of the Dead rituals.

We were so excited for the celebrations and booked our trip around it, but it turns out the touristic celebrations only happen in Oaxaca or Mexico City or happen the week before. It was a little upsetting, but it was still interesting to see the cultural significance of Day of the Dead to the locals.  If we do want to go to a Day of the Dead party or parade then I guess we have a reason to return to Mexico one day in the near future!

When we crossed by land from Brazil to Bolvia, we made one big mistake – we didn’t check how many days we were given on our visa. Having done research previously, I knew that Australians and Canadians are entitled to 90 days a year in Bolivia as a tourist, for free. I just assumed that this meant we would be given the entire 90 days upon arrival. I was wrong.

One day while in Sucre, nearly a month after we entered Bolivia, we randomly came across the stamps in our passports and noticed 30 days was written. I looked online and it is possible to extend, but it must be done at a particular immigration office within 5 days of the date of the visa expiry.

I couldn’t believe we had missed this detail, but we still had time so we printed out all the documents required and filled in the extension requests forms. We made our way to the office…and it was closed. We had a bus booked to the town of Potosi the following day so we had to leave Sucre without extending. 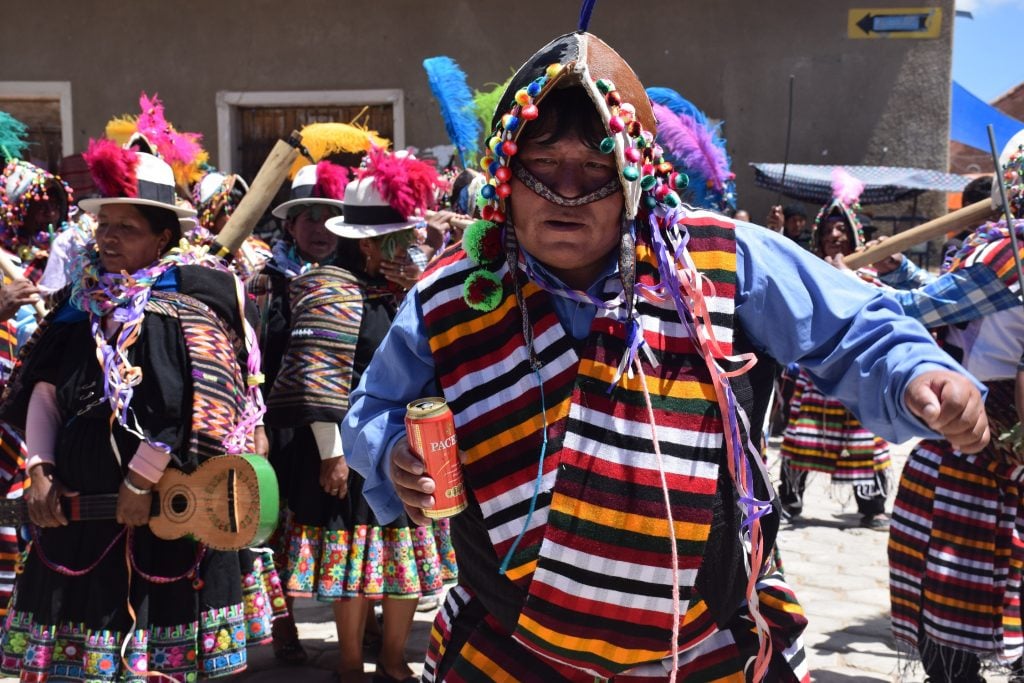 We loved Bolivia! This picture is from a festival just outside of Sucre. Read about our time in Sucre here!

Long story short, the lady working the immigration office in Potosi refused to extend our visa. She spoke zero English and wanted us to apply online, so we did. The website however wouldn’t work, we tried different computers and different WiFi connections at our hostel and several internet cafes. We translated an explanation to take with us back to the office to hopefully get the lady to help us. She refused again. Feeling very frustrated we gave up any hope of extending our visas. We ended up missing the expiry date and had no choice but to overstay our visa in Bolivia.

Overstaying our visas ended up not being to much of a problem. When we went to leave the country except about $20 USD fee each. The fee wasn’t an issue, but it was frustrating that we spent days trying to extend and couldn’t in the end. I now never cross a border without checking my stamp and ensuring I have the correct amount of time given! 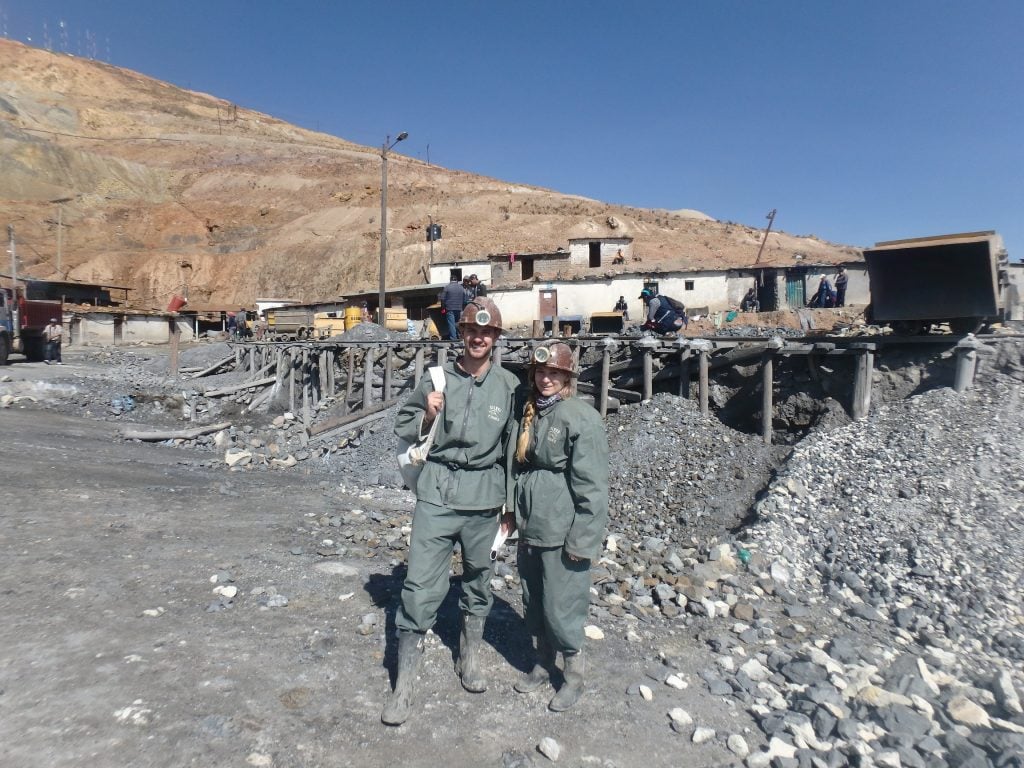 We couldn’t leave Bolivia early, we liked it too much…so we overstayed our visas! This was outside a mine in Potosi, Bolivia

These aren’t even close to being our only travel fails, but there are so many that I couldn’t even begin to cover them all. I typically research a lot to try to prevent “mess-ups”, but I suppose it is important to remember that when traveling, no matter how much planning and research you do, things will go wrong. Only thing you can do is embrace these bumps in the road the best you can and continue moving forward. Having a good laugh at our previous mistakes has been a fun way to reflect on 2017.

15 BEST Hikes in South America
← Previous
Top Things to do in Hong Kong
Next →
Click here to cancel reply.