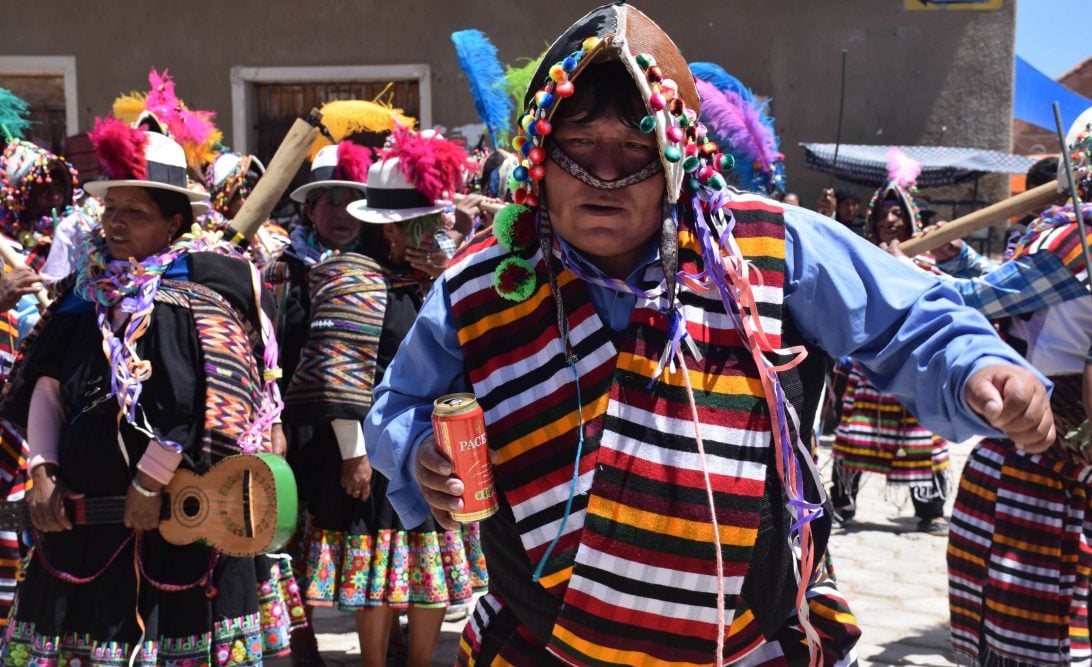 We found ourselves a little hostel and Sucre Spanish school called “Spanish Friends” and set ourselves up for two weeks of Spanish lessons. I did 4 hours a day, five days a week with a private teacher which cost only was 35 bolivianos per hour (about $7 AUD or CAD).

Challenges of Learning a New Language

Learning a new language is very hard. Daniel and I weren’t exactly beginners as we took some lessons in Australia before leaving on our trip and had no choice but to learn more when traveling the remote parts of Patagonia where not a single person in town spoke a word of English.

However, we had just finished two months in Brazil where they speak Portuguese so our Spanish was a bit rusty.  It was exhausting having to focus so hard in these classes. My teacher would try to teach me Spanish in Spanish, which I suppose is good for practice but my brain was FRIED everyday after class, I actually napped every single day. It was harder than any university class I’ve ever taken, these Spanish teachers don’t fool around and since it is one on one you do not have one second to slack.

Check out our other blogs on Bolivia here:
https://destinationlesstravel.com/category/bolivia/

Hanging out in Sucre

The two weeks in Sucre was nice though. Sucre is a very beautiful city and seems quite rich by Bolivian standards. It was very safe and clean. Crawling with tourists, but it made for better western food options and good gringo nightlife. We did Spanish classes in the mornings and then took the afternoons to explore the city. Sucre has great markets with awesome fruit juices.

One day we went to the dinosaur footprints which were actually so cool! You can catch the “dino bus” to the museum and location of the footprints and then pay 30 bolivianos for entrance which includes an English speaking guide. It is the world’s largest collection of dinosaur footprints!

We were lucky enough to be in Sucre during the annual festival in a town just over an hour away called Tarabuco. We caught a local bus, along with the majority of the population in Sucre for 10 bolivianos to this town. The festival is a celebration of the time in history when the Spanish were conquered. Today, they celebrate by having all of the nearby villages come together to dance, sing, and create the largest local market. We wandered around for hours shopping and people watching. It was a great day.

Life in Sucre for Two Weeks

It was nice to be setup in one place for two weeks. When we are on the move so much it can get exhausting, it is good to unpack and get to know the city a bit. However, Bolivia is a bit difficult to live in due to the poor food conditions. All three of us found ourselves very ill countless times. A lot of the fruit and vegetables are grown in bad soil and the meat is not stored properly. Besides that, general hygiene is also a problem with many bathrooms not offering soap and restaurants (even the more expensive ones) not having proper hygienic practices. Every single time you eat or drink, you risk getting sick whether it be for a couple hours or for a couple weeks.

Even if the food is clean and won’t make you sick it was extremely hard to find food that was good. Santa Cruz, Samaipata, and Sucre all did not have any western food chains! I know this sounds silly but when you have been eating plain old chicken and rice for three weeks you would do anything for McDonalds or Subway. They had local fast food chains – again though, deep fried disgusting chicken and french fries is the only option. You can buy Hamburgers from food stands or restaurants but after getting one too many that come out bright pink I gave up on that option. You can’t eat fresh fruit or vegetables from food stands or restaurants (unless you can peel it such as banana or orange) without risking getting sick because even if they were grown properly, they were probably washed in water that would make you sick. Needless to say, I lost a lot of weight in Bolivia and couldn’t wait to have a real meal.

Did the Sucre Spanish School help my spanish?

Two weeks of Sucre Spanish School has left me somewhat more capable as I can pretty much ask for what I want, read signs and menus, and understand basic conversations. I can’t have a full conversation with a local about politics or anything but I am definitely more able to get around and speak to people which has relieved a lot of our previous daily stresses. If you are planning a South America trip don’t be as naive as me and assume it’ll be like South East Asia or Europe where there is always someone who speaks some English, I would highly recommend studying a good amount of Spanish before even attempting the trip. But if you don’t, Sucre is a good city to learn as lessons are very cheap and Bolivians speak proper Spanish with less slang and weird accents than their neighbouring countries.

Related Read:   What Made Me Fall in Love With Cuba

17 Best Things to do in Ella, Sri Lanka

5 CRAZIEST Things you can do in La Paz, Bolivia

17 Things to do in Trincomalee, Sri Lanka

14 Best Things to do in Haputale, Sri Lanka

17 of the Best Things to do in Mirissa, Sri Lanka