The Death Train Bolivia: Everything You NEED To Know 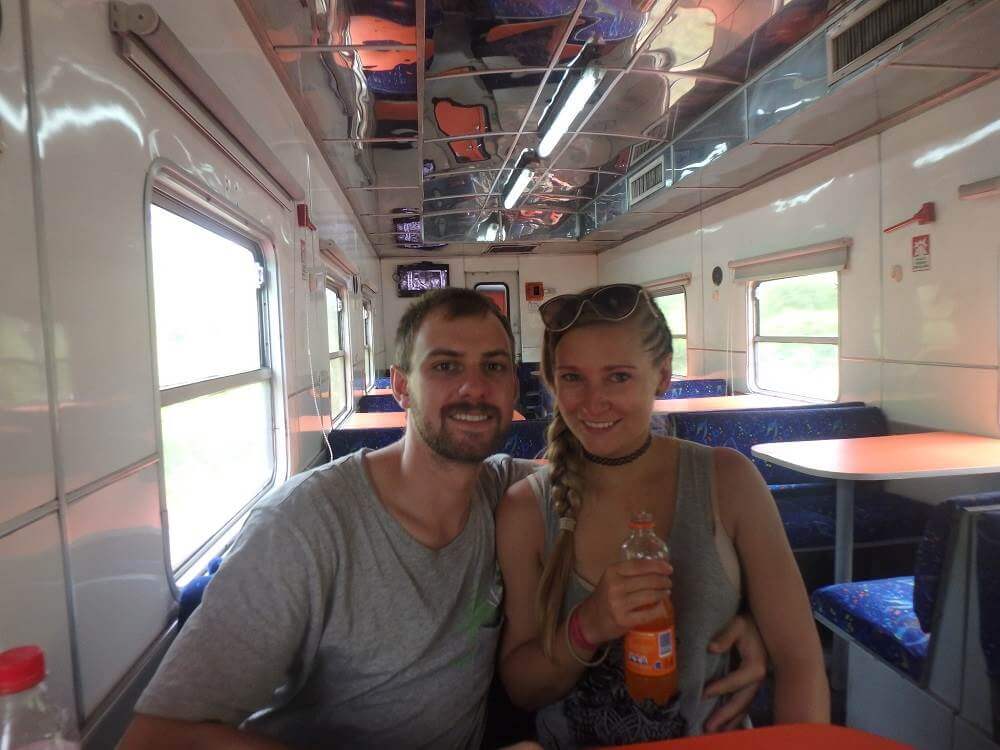 As our time in Brazil came to an end we had to make a massive journey to Bolivia. Of course, we looked at flights but given the lack of adventure and price tag, we opted to travel by land using the famous Deat Train in Bolivia.

Our journey from Brazil to Bolivia by land (complete guide linked) was a long one. It involved hopping on many different busses and visiting small rural towns. However, the most interesting part of the journey was our overnight trip on the Death Train.

What is The Death Train exactly?

The journey on the Death Train from Puerto Quijarro to Santa Cruz takes 16 hours.

There are two different trains that leave on different days as one another. The first and cheapest is the Expresso Oriental and this train costs about $10 USD depending on the current exchange rate. The other called the Ferrobus costs around $35 USD.

I know what you’re thinking, “wait, there are two types of Death Trains?!”  Yes, one is nicer than the other and more comfortable hence why it is more expensive. They each have their own schedules, keep reading for The Death Train schedules.

Related Read:   5 CRAZIEST Things you can do in La Paz, Bolivia

So…why is it called The Death Train?

The reason the Death Train in Bolivia got such a scary name is that the train was once used to transport sick people during the Yellow Fever outbreak. People with the mosquito-borne Yellow Fever virus were all transported to remote camps to be treated.

However, the train was also used to transport victims of Yellow Fever sot their bodies could be berried away from the cities. Although the train isn’t dangerous it has a very dark past.

However, there is another tale that says the Death Train got its name from all the workers lost their lives during the construction of the tracks. However, this tail not only talks about the railway workers dying from accidents but also Yellow Feaver.

This is because this area of Bolivia is prone to mosquitos and as such the chances of catching an untreatable mosquito-borne disease were high.

Regardless of which tail you believe, both tell a dark story.

Is The Death Train dangerous?

I would love to tell you no, but that would be a lie. Like any sort of transport in South America, there are risks involved.

When we started off the journey on The Death Train the sun was just beginning to set and we began to relax. However, before we could get comfy we looked out the window and saw a train completely derailed and on its side.

We didn’t know if this train had passengers on it or not at the time of the accident, but it looked identical to the train we were on.

Besides that, the train does rock from side to side viciously making me think that the chance of derailing is possible.

That all being said, the alternative option from Puerto Quijjaro to Santa Cruz is a bus. Bus drivers in Bolivia work endless hours without a break, many seem under the influence. Not to mention the roads are less than suitable for winding up through the mountains on cliff edges. One of the reasons we chose The Death Train was that it was the safer option of the two.

Most people would ask “why don’t you fly”, well the buses and trains were $200 cheaper, and although it was 40 hours longer it was a new and exciting experience many backpackers don’t get to have.

Overall, I would say the biggest safety concern on The Death Train is theft. It is a common mode of transport for poorer locals, so I wouldn’t leave your carry-on bags unattended ever and make sure you have no valuables in your checked bags. Also, consider tipping the gentleman who takes care of the checked bags if you want your bags to make it to your stop.

Related Read:   15 Things to KNOW Before Visiting the Salt Flats in Bolivia (2022 Guide!)

The Experience- what The Death Train is really like

Based on the name alone we were concerned about what we were in for by taking The Death Train. We thought it would be dirty, dingy, smelly, for the mere price of $10 we thought the train was going to be downright awful

But boy were we wrong.

The journey started off great as we hanged out in the restaurant carriage and even got some beers at a stop. There is one carriage on the train which is a restaurant. When we were there nobody else ever was, I think that most of the locals pack food with them. The food was decent and decently priced at 20 (under $3 USD) bolivianos for a full meal.

Besides eating, the restaurant was a good place to hang out as there were tables and it was more spacious than the seats.

The restaurant doesn’t serve alcohol, but as I said before, we managed to bring a couple of beers on board with us when the train stopped to pick up more passengers. The train does stop occasionally but not for long and it isn’t encouraged to get off as it WILL leave without you and without notice.

I risked it anyways at one stop and jumped off to buy a couple of beers. At this stop in particular, there were many locals waiting for the train to arrive to sell their goods.

The sleeping part was a challenge though. The whole time we were awake we were shocked at the amount the train bounced around. It was like sleeping on a cheap rusty roller coaster.

My sleep was made up of short naps with waking up to the feeling of butterflies in my stomach from the violent movements of the train.

If you get motion sickness, do not take The Death Train!

Besides the rocking, the facilities weren’t too bad. There were a few bathrooms that stayed fairly clean and the seats were the same as standard seats on buses. The seats reclined a bit but not fully which is what is advertised on the more expensive train.

Related Read:   ULTIMATE Guide to Potosí, Bolivia and the World's Most Dangerous Mine

So, if you have decided that you are ready for the adventure which is The Death Train, the next step is to get tickets.

There is a website online in which you can buy tickets, but I was unsure whether to book it this way simply because we did not know how long crossing the border from Brazil would take that morning. I didn’t want to miss the train and have to buy tickets again as the train only leaves at very select times.

Locals in Corumba (the town on the border in Brazil in which we spent one night before catching the death train) kept trying to sell us The Death Train tickets. People at the bus station as well as workers at the hostel and a taxi driver! This is because they make a commission and therefore overcharge you for the thicket.

We ended up just buying tickets at the train station, it was simple, easy, and the train wasn’t anywhere close to selling out. The train station is called Luis Salazar de la Vega Avenue and it is only a two-minute taxi ride from the border.

One of the most difficult things about taking The Death Train is actually timing your arrival/departure correctly with the select times The Death Train actually leaves. We were coming from Brazil so we had a border crossing to consider as well which made catching the train at the right time even more challenging.

We wrote a blog about our entire journey from Brazil to Bolivia, a step by step guide! Read it here.

The Death Train leaves Tuesdays, Thursdays, and Sundays at 1 pm, and then on Mondays, Wednesdays, and Fridays at 6 pm. The 6 pm bus is the more expensive $35 bus and the 1 pm bus is the one we took for $10 USD.

If you get the chance to choose where to stay I’d recommend Corumba as it is safer and in a famous region of Brazil called the Pantanal. From Corumba there are some cool tours to do at the right times of the year.

It is also worthy to note that Daniels Australian bank cards did not work in Puerto Quijarro. So, I’d bring a little cash with you if you are Australian just in case.

You can browse accommodation in Corumba here.

I hope this post has answered some of your questions about The Death Train and has given you the information needed to decide whether it is a good mod of transportation for you or not. If you have any other questions I would love to respond to them in the comments.

If you are traveling more in Brazil of Bolivia be sure to check out our selection of other blog posts! Click here for Bolivia, and click here for Brazil!

i would prefer to see more photos from death train. is it beautiful scenery or not? Well from Brazil to Bolivia it sounds more easier. Because from Bolivia to Brazil is more horrible. As you have to wait after your bus arrive several hours while border will be opened. Who make this stupid schedules of buses! Because of this i really don't want to go this way now :( Silly bolivians

Unfortunately, we don't have more photos.

The scenery is nice but once it's dark you can't see anything, however, it is an adventure visiting the random train stations along the way.

Yes it is such a shame the border and bus times don;t line up better!

Let me know if you have any other questions

I really enjoy the challenge and it makes for better stories!

Reading my brother's Journal (1974) which is gripping. I am up to the Death Train & they have just seen a derailment...

Damn! Hope the rest of your trip is better! Cold beer in the tropics is always welcome.