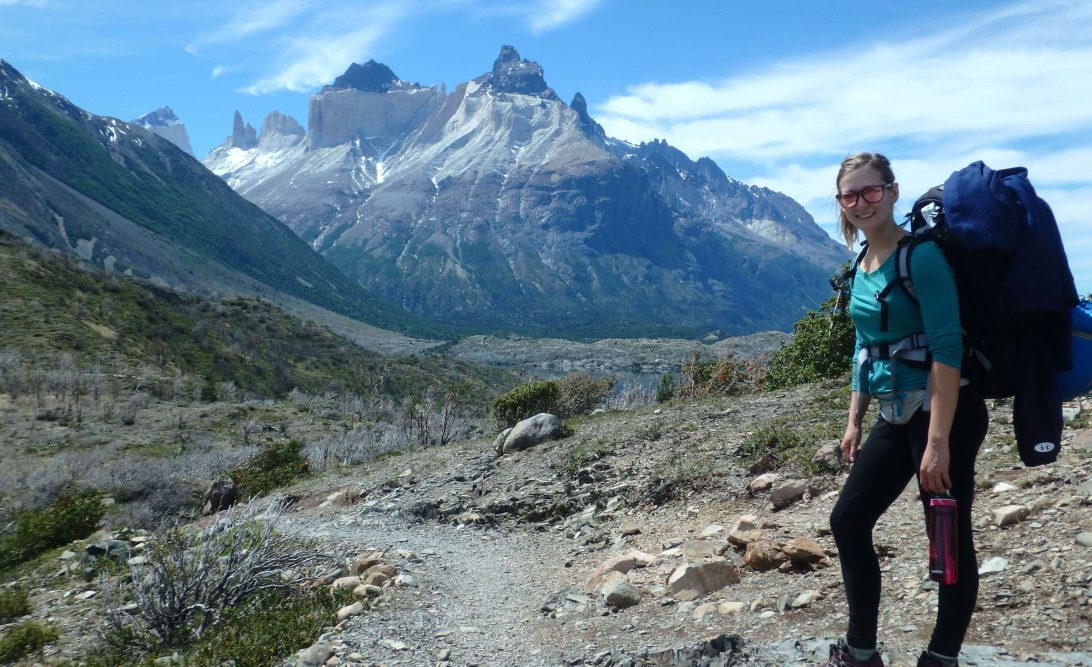 The 5-day Torres del Paine W Trek was my first ever multi-day trek! This is my story of completing this challenging hike in remote Patagonia without a tour, a guide, and camping the whole way!

​​After 79.5 hours on buses, 5105 km, 6 different cities, and 14 days we made it Puerto Natales in time for our Torres del Paine trek! It had been a whirlwind of a “holiday” up to this point and I am just trying to enjoy as much as possible while still moving very consistently.

We had to make it to Puerto Natales before November 19 because the Torres del Paine trek requires booking all of the campsites in advance in order to enter the park. Due to popularity and the peak season being only a couple of weeks away, it was vital that we booked everything well in advance.

Daniel booked our trek back when we were in Australia. In hindsight, we probably should have allowed ourselves another week or so to make it to Puerto Natales, but we made it and had a blast along the way anyways!

We arrived in Puerto Natales the night of November 17 and had booked the trek to start on November 19, this allowed us one full day to prepare for the trek.

We were able to rent the gear we needed (tent, sleeping bags, cooker and fuel, pots and plates etc) and buy all of our food. We had spent quite some time researching on blogs and speaking to people about what kind of food was the best to pack – keeping in mind that whatever we pack we must carry on our backs.

We also went to “the 3 o’clock talk” which was an advice seminar hosted by a local hostel about completing the trek and how to prepare and plan properly.

Besides being the starting/ending point for the Torres del Paine trek, there isn’t much at all in Puerto Natales. It is small and everything seems to be within walking distance. The town is littered with rental shops, hostels, hotels, and travel agencies.

The first morning we had to catch a bus at 7:30 from the Puerto Natales local bus terminal which took us to the actual park entrance about 2 hours away. We bought our park entrance passes and then got on another bus which took us to a lake. From there we took a 30min boat to the west starting point of the ‘W’ trek.

Our camp spot that night was at a place called ‘Grey Refugio’, 11km away. This was supposed to be our “easy” day as it was only a half-day of trekking.

The first kilometer or so was relatively flat walking through a valley. However, that quickly changed. Within an hour I was huffing and puffing and I was sore. It was chilly that morning so I was all bundled up with two layers of pants, two long sleeves shirts, a sweater, a windproof jacket, gloves, and a beanie; but as soon as the trek started going uphill I was sweating and needed to shed some layers.

We kept on walking, stopping only briefly for a Nutella sandwich. After a couple of hours, we were so sure that we were almost at the campsite until we saw an information sign. The sign informed us that we had only walked 4.5km and still had 6.5km more to go to the campsite. I couldn’t believe it, I had felt like I had already walked so far and I was so tired already! It was at this moment that I realized that the next five days were not going to be as easy as I naively anticipated.

Related Read:   The Best Hikes in South America - My Top 8

It took us about 4 hours in total but we made it to the campsite. We set up camp and then went for a little walk to a viewpoint of the glacier. By now the weather was beautiful and we were able to relax in the sun for a while.
The campsites have designated cooking areas due to the high risk of forest fires in the area. In Refugio Grey the cooking area was inside a small room, it was cramped and full of people trying to boil water basically on top of your lap! It was super dangerous and I hated every moment of being in there. I was starting to wonder what I had gotten myself into.

That night it was a bit cold but I slept fairly well nonetheless. We woke up early and hiked to the glacier and back (about 4 km) and then made breakfast, packed up our site, and headed back down the trail. That day we had another 19 kms ahead of us – and I thought the first day was tough!

Related Read:   ​"You're not a Mountaineer, Bianca" - How I survived Hiking Acatenango in Guatemala

Anyhow, we made it through the day and the views and scenery along the way were just breathtaking which helped make the time pass. We arrived at our next camp (Italiano) and were very sore. Poor Daniel was carrying much more weight than me so I couldn’t imagine how sore he was.

The next couple of days I got into the groove of things. I accepted the fact that I would be climbing mountains for 8-10 hours each day and would be ready for bed by 6 pm each night. I also started really enjoying it, it was fun to drink from the streams and see the beautiful scenery. There was also something very satisfying knowing each night how far I had come.

Besides being silly and thinking an 80km hike wouldn’t be anything more than a ‘walk in the park’ – we were actually pretty prepared.

We brought the right amount of clothes and gear and food. Overpacking is just as bad as underpacking in a situation where everything you bring you must carry. Our food situation consisted of oatmeal with powdered milk and powered Nesquik for breakfast; lunches were more like consistent snacking throughout the day of Nutella sandwiches, chocolate, nuts, and granola bars; dinners were either pasta with tuna, or powered mashed potatoes with tuna. We only each brought two sets of clothes, one set of hiking and one set for sleeping (with extra pairs of socks and undies of course.)

The second last day was the hardest by far, 20km of nearly all uphill with little shade and it was hot that day. My knee started to give me quite a bit of trouble and at times I wondered how I was going to get back down the mountain the following day. Besides it being a long day, we actually got through it quite quickly and were one of the first ones at camp.

The final day we got up at 4:30 to make the last 45min trek up the mountain to see the famous Torres at sunrise. We were smart and brought a sleeping bag and mat with coffees to the top to enjoy. It was stunning.

We finally finished the trek! Five days, four nights, and about 80km – we lived. I may not have been as fit as I thought I was but I was sure proud of myself for finishing it. After seeing the state of some of the other people catching the bus back on the last day I realized that I wasn’t the only one who thought it was challenging (some people could barely walk.)

Overall it was an amazing experience. Would I do it again? Nope. Not just because it was a lot of work, but now I have done it and it’s off the bucket list and time to do a different hike elsewhere. Was it worth it? Absolutely! So beautiful and a great experience so different from anything else I have ever done before.

Our days of trekking are not over yet, next we head slightly north to El Calafate and El Chalten where the main attractions are also hikes. I suppose we need to take advantage of the cool weather and mountain beauty of Patagonia before sweating on a beach in Rio for New Years. I think the diversity of South America is really what makes it so intriguing for so many people.

If you liked this blog, be sure to check out the rest of our stories! Or if you want more info about travelling the area, check out our Patagonia travel guides or Chile travel guides!

10 Fun Things to do in Olinda & Recife, Brazil