One of Central America’s Most Dangerous Borders 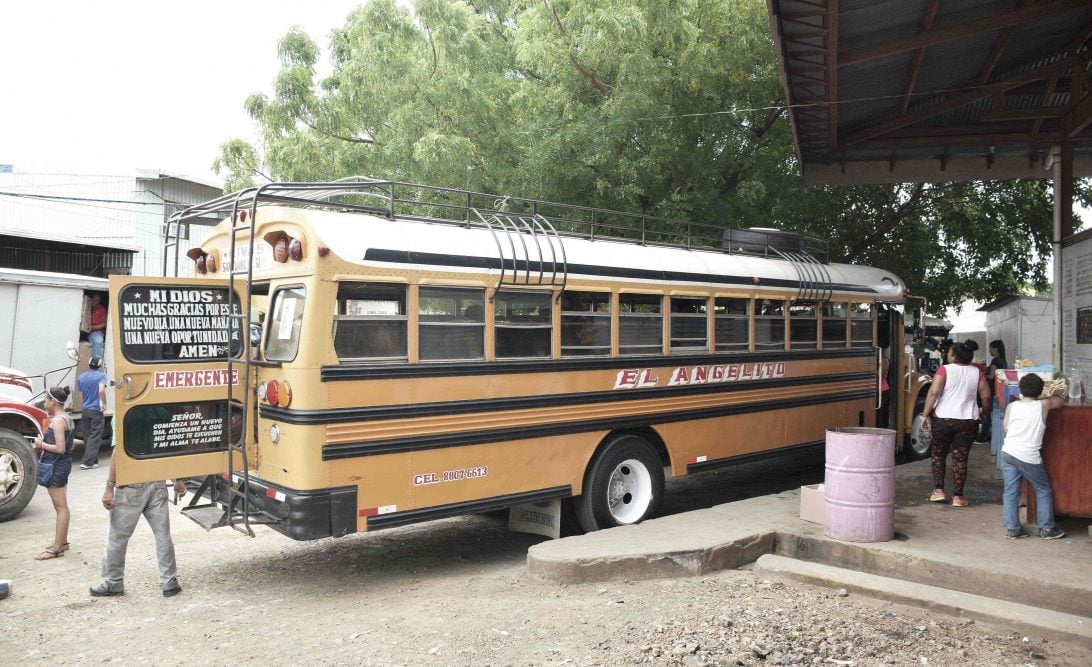 Since entering Central America we had the impression that night buses were behind us. We could now cruise down the road to our next location in only a few hours. You see, South America was massive and the long journeys only made sense at night – on long haul buses (sometimes over 24 hours.) But from now on the countries in Central America were small and the journeys would be completed during the day, we could gaze out the window at the beauty around us. And for a while that was true. We moved through Panama’s countryside with freedom, Costa Rica’s mountainous cloud forest with cool damp air in our lungs and enjoyed the views of Volcano’s for most of our journey through Nicaragua.

During this time we had fallen in love with the local buses unique to Central America. These were known to travellers as “Chicken Buses” largely due to the fact that it’s not uncommon for animals to be transported on them. They were old school buses from North America, they blew clouds of black smoke and sounded like they were dying. Old stickers still resided on the walls and roof while the names of kids were scratched into the seats. In places like Nicaragua, the windows were never closed, for they were the lungs of the bus and the only thing standing between the passengers and heat exhaustion.

The drivers were calm and rarely spoke, rather they turned to the fan that clung above them. That fan (still likely the original) saved their sanity from the blistering heat. On the bus, two other men would be in charge of the community of people and they collected money from passengers while also screaming out both the front and back doors in a seemingly frantic attempt to attract more passengers. There was no limit to the number of people they would take and often the buses would end up overcrowded and shoulder to shoulder in the aisles.

At all the stations, mobile vendors would enter the buses. They walked the already crowded aisles selling food and snacks. Often passengers would become collateral damage as they pushed and shoved their way to the back of the bus in search of customers. The types of food were endless although one type caught my eye. They were small clear bags filled with a piece of fried chicken, white rice and a tortilla wrap. The bags were blown up with air, acting as a protective layer like a large single bubble from bubble wrap paper. This was Central America’s very own fast food!

This crazy bus system that was chicken buses could only work in places like Central America. No matter how overcrowded the bus was or how many times people squeezed past others invading more than their personal space the vendors would continue to get on. They seemed to respect each other’s right to make a living and understand their personal comfort was not worth a person’s livelihood. They simply smiled at each other and often laughed at the large beads of sweet pouring from their faces. This way of transport was not the most comfy but it was authentic and I loved it!

Now, in Leon, our last stop in Nicaragua we had El Salvador in our sites. To our first destination the journey would take two days by chicken bus (buses only run during the day) or 11 hours by shuttle (mini van) during the night. The journey involved crossing through Honduras and its two borders in a note so safe area. For a few reasons we chose the shuttle at 8:30pm over the chicken bus that would take way to long. So we packed our bags and left our hostel for the easy journey to El Tunco, El Salvador.

It was 8pm and we had made it to the hostel where the shuttle would leave from. As soon as we arrived we were told by the hostel owner that the shuttle would be one hour late. He was a large set man who spoke perfect English that showed little facial expression or care for Gringos. Over the course of the next few hours, his arrival times began to change every 30 minutes. He seemed to uncontrollably chuckle to himself at every update he presented to us. This gave a weird feeling of mistrust and my mind wondered about the journey ahead.

When the bus did finally come some 2 hours late, the task of fitting everyone inside with our bags took another hour. The bus was overbooked and even though this is a well-established company the fact everyone had bags seemed to catch them off-guard. The drivers stood around confused and for the first 30 minutes and simply gazed at the bus.

I watched nervously as a young Nicaraguan man called Jose tied the last knot holding our bags in place on the roof. It took Jose several attempts as the rope continued to gain slack after he tied it off. I saw a nervous panic in his eyes as up to 12 people all watched him try to secure our bags for some 30 minutes. Jose knew the roads were bumpy on the route and losing one of our bags would not help this already restless group. I was sure at least one bag wouldn’t make the 11 hour journey but I let fate decide and we all got ready to go.

A group of 10 travellers piled into a van made for less and like Tetris blocks we all moved into place. Every movement became precise and once in place it became impossible to move. The journey had begun and despite the rough start, spirits were high. We headed for the Honduras border and 3 hours later we made it, our bags still held tight with the complex but dodgy rope system used by Jose.

The border was empty, it was 2am and only a few stray dogs wandered the streets. I had been warned about the crossing between Nicaragua to El Salvador which passes through Honduras. Honduras is well known for its violent robberies and high murder rate. In fact, San Pedro Sula, the capital has the highest murder rate in the world. This with other recent incidents in the area including a tourist bus robbery which ended with travellers having bullets fired over their heads while tied up had tensions high.

Once we had our passports stamped we loaded into the van once again. It was then that the bus driver let us know that he would be unable to slow down for anything including potholes, dogs and people as the area we were passing through was too dangerous. Driving too slowly or stopping allowed an opportunity for robbers or gangs to approach the bus. We had planned on getting sleep, however after realizing that the danger was real everyone was wide awake.

Our eyes were glued to the windows, looking for any sign of danger. The journey was rough and with every loud bang as we hit pot holes at great speed my teeth would clench. The fear of rolling a tire off of the rim was a scenario I didn’t want to think about. The drive was three hours until we made it to the border of El Salvador. No one seemed to sleep and if they did, it wasn’t well. Even if you managed to put the chance of an armed robbery to the back of your mind, the bus was overcrowded and the roads were unpleasant.

The sun began its rise over the surrounding hills and with no sleep, I tried my best to answer questions from an El Salvadorian immigration officer. She asked which cities I was going to and in my state, I simply replied “uh, El Salvador.” She appeared confused and then laughed, opened a clean page on my passport and stamped it.

I had made it! Well, there was still 5 more hours until El Tunco but the hard part was over. The drive was smooth and with the sun out, the freedom of being on the road filled the car. We laughed and joked about the night that had passed us by all too slowly. We had made a quick stop for coffee before loading into the van one last time all with a new found skill in Tetris and even more love for chicken buses.

Despite our bus ride, there are actually lots of safe areas to travel in Honduras! Check out thing blog about all of the different things to do in Honduras!