Pre-Carnaval Celebrations in the Vibrant Salvador

It was a toss up, do we spend Brazil’s biggest and most famous festival in Salvador or in Rio? I researched and researched and there was no clear-cut answer. Some say Salvador is more colourful and traditionally authentic, and others say Rio has the best Samba schools in the world and the craziest parties. We needed to book accomodation in advance so we made the typical tourist choice of Rio, we knew it would be more international and we did love Rio so it was an excuse to come back for round three.

That being said we didn’t want to completely miss out on Salvador, so we made sure we spent pre-carnaval (the weekend and few days before the official Carnaval) in Salvador.

Salvador was crazy – in the most unique and culturally vibrant ways you can imagine.

We went to the most popular pre-carnival bloco (street parade and party) on the Sunday in a neighbourhood called Barra. For kilometres and kilometres the streets were so packed you could barely move (Brazilians don’t have a personal space bubble and are happy standing right up against any stranger.) 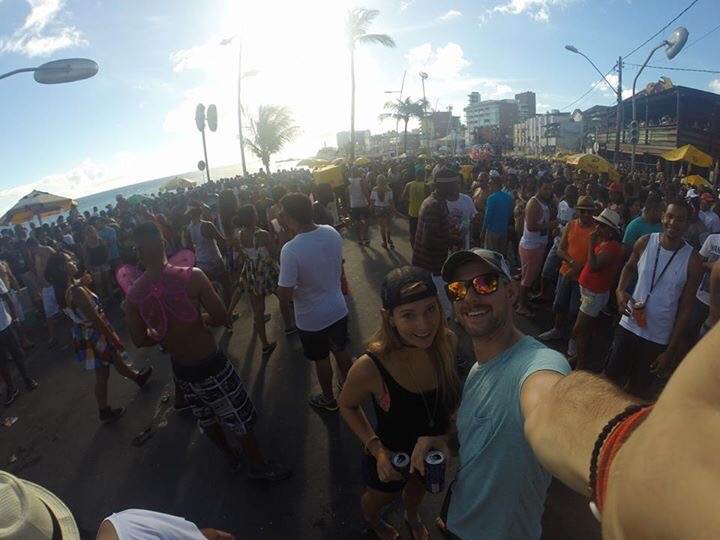 You must imagine millions of people in the streets. Some with costumes, some dancing, some drunk, some children. Street vendors selling everything from beer to costumes to body paint services. Music blaring from passing floats and a crowd of supporters parading around them. I don’t think a single person (of the millions there) was having a bad time. The energy was electric.

Daniel and I partied all afternoon and until the sun went down. We realised as we were leaving hours before the parade ended (nevermind the after parties) that we are not nearly as good at partying as the Brazilians and we must pick up our game before Rio!

We left dehydrated, drunk, but still buzzing and super excited for our next bloco!

After spending a couple nights outside of the historic centre (purely to save some money on accomodation) we decided to book a Pousada (a small family-run hotel or hostel) in the centre for our last two nights.

Over the next two days we got to be real tourists in the tourist centre. We wandered the cobble stone streets going from viewpoints to museums to historic churches.

Some of our top experiences in Salvador were:

1. Lacerda Elevator – this is literally like a normal elevator but it is built on a hill near the coast. Locals use this like they would a bus. Tourists use it for an awesome view and a lazy way to get to the markets.

2. Mercado Modelo – a two story building full of market stalls and food. Good fun! I was able to get my hair braided for only R$20. 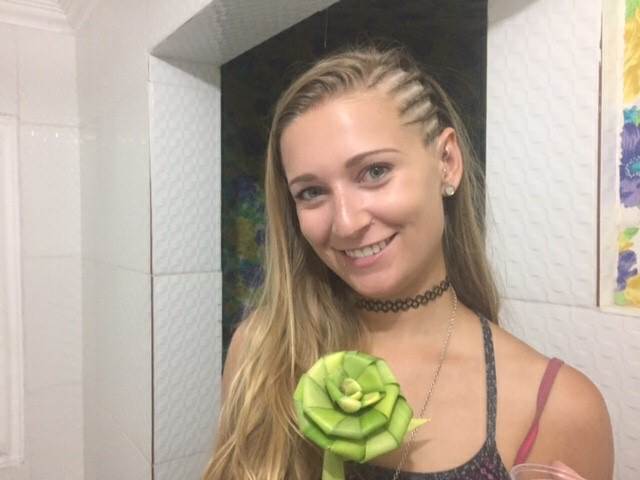 3. Trying Acarje – I’m not going to sugarcoat it, it wasn’t good. Arcarje is like a deep fried processed fish patty used as a bun with some sauce and vegetables and prawns inside. Sounds not too bad, right? They don’t peel the prawns here and they are too tiny to peel yourself so you basically have a crunch prawn shell fish sandwich. It was still a top experience though because it was super funny watching Daniel near throw-up after trying it.

4. Samba and Drums all the time– I have heard that bands of drummers in Salvador is normal but I’m sure it was even more apparent during our visit due to carnival being just around the corner. We could even watch some of the parades from our hotel’s balcony!
​​​

5. The pre-Carnaval Bloco – after being to Rios blocos I think that those in Bahia might actually party better! The bloco was interesting with several different bands and floats going down the street. Everyone sings and dances, the African influence is very apparent and interesting to watch.

Even though we had one bad experience with a robbery while in Salvador, this didn’t make us change our minds on how amazing the city was. One of the beautiful things about Brazil is the cultural differences within the country. So many tourists just visit Rio and they miss out on the completely different culture of the Northeast– this is a shame. Salvador is definitely a top destination in Brazil for tourists.

some of our other unique experiences in Brazil here:
https://destinationlesstravel.com/category/brazil/

10 Tips for Travelling Fiji on a Budget