GUEST POST by Liam O’Neill: Liam O’Neill is a fellow backpacker originally from Australia that we met in Rio De Janeiro on New Years Eve. We continued traveling with Liam for a month in Brazil before going our separate ways (however we meet up again tomorrow for Carnaval in Rio). Liam has been traveling South and Central America for 16 months now and has shared many interesting travel stories with us from his trip. We asked him to write about one of his most memorable moments to share with our readers on our blog! Here is his story about his initial arrival in Guatemala: 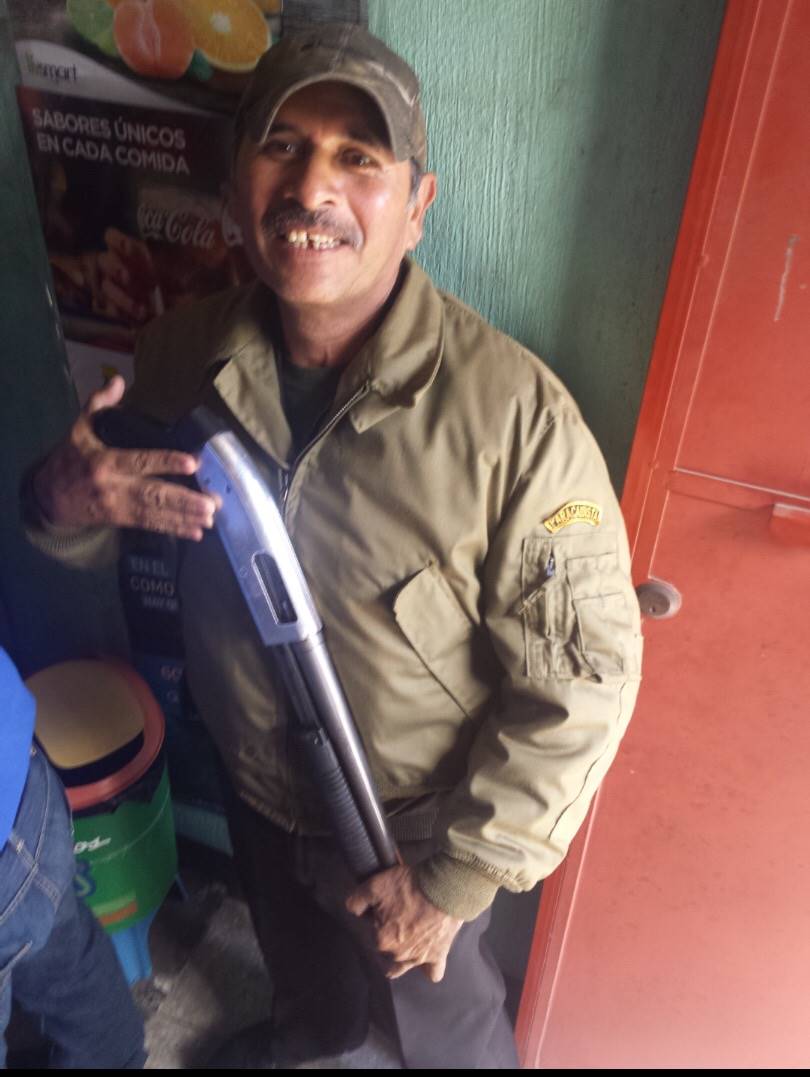 After a month and a half in Puerto Escondido in Mexico, I felt a massive need to continue traveling south after a week long battle with the mosquito borne virus Chikungunya, the departure of good friends (Adam, Pepe and Calvin), the end of my work away contract at a hostel, and a large “flat spell” leaving the surf waves 2 foot and closing out.

Puerto Escondido was surrounded by protesting teachers preventing (or severely limiting)  most travel by bus in the southern states of Mexico. The teachers protesting were also attacked by the military police resulting in many fatalities making travel very dangerous. This hindered our original plans to travel to Guatemala by bus as many companies had cancelled most services. My friend Roman and I therefore decided to book a flight to Guatemala at 3am on the 14th of July as we had heard rumours that these protests could potentially drag on for months!

The night we left was a cool, still night in Mexico City. We rose out of our hostel beds with mixed emotions of excitement and regret for booking a flight to Guatemala at 3am.

Unfortunately in order to fly to Guatemala, we had a lot of backtracking to do. This meant a flight from Mexico City to Guadalajara and then onto Guatemala City. Condensing the boring shit that took place over the course of our flights – Roman managed to befriended a ex-pat Guatemalan on the flight inbound for Guatemala city.

Related Read:   Hitchhiking in Chile: Our First Experience and What We Learned

When we arrived at the airport we collected our baggage and had our passports stamped. Roman’s new ex-pat friend had offered us a lift to the bus stop so we could get to the old colonial town called Antigua. We graciously accepted his offer as we both travel on a shoestring budget.

Roman and I eagerly jumped in the tray of his pick up and began the wild drive through the streets of Guatemala City. The drive through the city was scary as floating in the middle of the ocean with a bloody stake hanging off your leg. The reason being the is the huge evidence of poverty (people living in houses built from plastic, bricks and sticks) as well as the expat constantly warning us to hold our bags  and watch our surroundings as we drove through the chaotic streets.

The way the driver drove resembled the way a secret service car would drive in a conflict zone. Our driver was dodging and overtaking cars, dodging people crossing the road and not even bothering to stop at signs and overtaking people. It was like our driver had watched too much 2 Fast 2 Furious.

After an intense 10 minutes weaving through the back streets from the airport like a drunk driver trying to avoid a boozebus. We finally arrived at a car garage in a fairly run down neighbourhood. Our ex-pat friend mentioned he needed to quickly get his window tinted before dropping us at the bus stop.

Roman and I jumped out of the car, sat down and instantly occupied ourselves by watching the news. The news was featuring a story about a chicken bus where some bandits hijacked a bus, shot the driver as well as a few people on board and robbed the survivors of everything they had. This news wasn’t what we wanted to hear as we were about to board a chicken bus to Antigua from arguably the most dangerous city in Guatemala.

An hour had passed from when Roman and I sat uncomfortably, parched and hungry watching the mechanics at work. I started noticing a few of them had pistols attached to their belts.

Eventually when our thirst became unbearable, we asked our friend where we could get drinking water. He suggested the shop around the corner, but ordered us to wait while he organized a personal armed escort. He waved his arm over at the main security guard who was armed with a shotgun and a pistol telling him that we needed to be escorted (approximately 200m) to the mini market around the corner.

As soon as we left the safety of the mechanics store, I felt a mixture of adrenaline and fear as I was swearing to Roman about the impending situation. We left the shaded mechanics and ventured out in the sizzling hot Guatemalan sun sticking closely behind our security guard.

We made small observations of our surroundings noticing a high percentage of stores and shops were barred with steel rods as thick as your fingers, with a few of the larger shops even having armed guards at the entrance.

Once we had arrived at the small shop and bought our water, Roman and I started explaining to our friend how crazy this situation was. He simply replied that this is part of the everyday life here.

After we finished sculling back the cold water our group made the decision to leave the fortified shop and head back. During the walk home, I was internally debating about the idea of capturing a photo for evidence purposes.

There were some very sketchy looking characters  observing the two gringos walking through the streets. As we began to approach the corner close to the mechanics shop I made the decision to get a quick photo. I hesitantly pulled out my phone and snapped a photo (pictured below.)

Related Read:   ​"You're not a Mountaineer, Bianca" - How I survived Hiking Acatenango in Guatemala 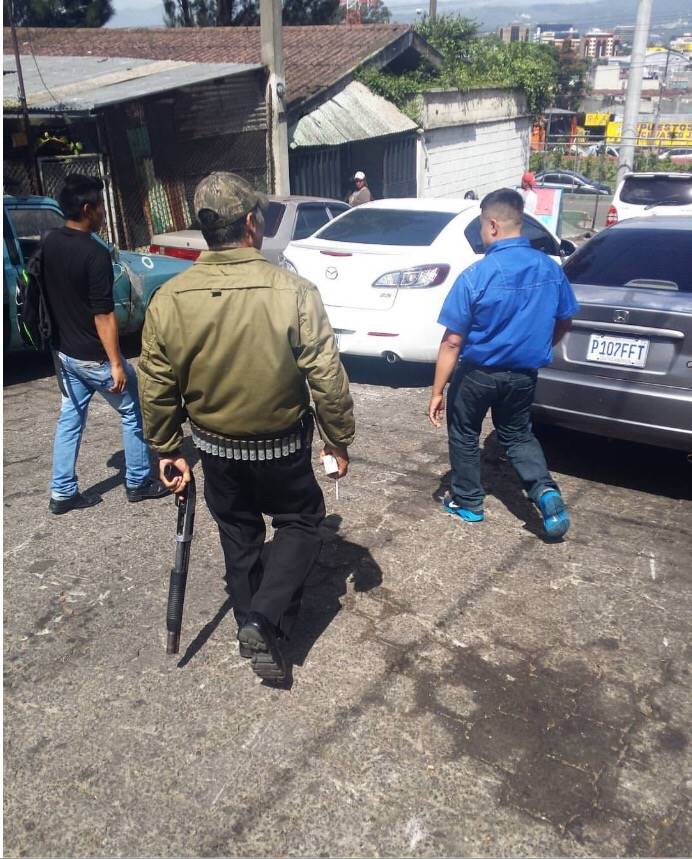 Much to our delight, when we returned to the mechanics the window tinting was complete. Roman and I ecstatically discussed the experience we’d just shared and thanked the security guards for providing the escort before re-embarking on route to the bus shop.

Leaving the shop, the frenzied driving began again through some more sketchy looking areas, until we pulled off a main road and parked near a chicken bus. The chaos of the situation was enough to make anyone sweat and swear as Roman and I had to literally grab everything we had and sprint to the chicken bus impatiently waiting for us.

Trying to thank our ex-pat friend and his family as we bailed the ute with the lightening speed. Fortunately, our journey on the chicken bus was problem free, despite the scary news we had watched only a few hours before.

The chicken bus was  interesting to say the least. Through the hour long ride we depressingly witnessed people trying to advertise and sell novelty items like hairbrushes and bubble-gum in order to feed their family.

As we arrived, Roman and I started to spot foreigners and felt an instant relief. Although most of the time I travel I much prefer to spend time with the locals , this was one exception where I was stoked to see fellow gringos.

It was such an unusual, unexpected and crazy situation we ended up in that we both felt obliged to get drunk as soon as we arrived at our hostel. Roman even broke out is last genuine Cuban cigar which we both thoroughly enjoyed it like a prisoner on death row enjoying KFC as his last meal.

One Reply to “Armed Escort to Buy Water – Guatemala City”