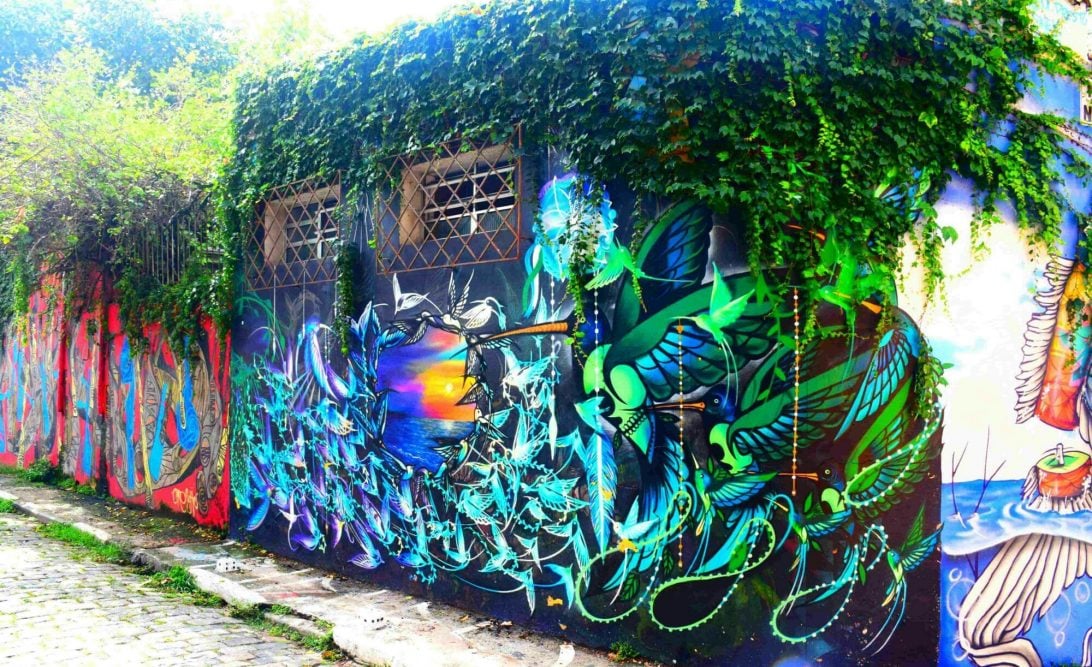 In terms of Brazilian cities, Sao Paulo and Curitiba are usually forgotten by tourists who often only visit places like Rio and Florianopolis. We decided to explore these less travelled cities and had a brilliant time. Here is what we did in Sao Paulo and Curitiba including some advice and suggestions for travelling there for yourself!

After spending a few too many days relaxing on the beaches we were ready for the hustle and bustle of Brazilian cities once again. Sao Paulo was the next logical destination as all of the buses seemed to go there.

Daniel and I started originally began our whole South America trip in Sao Paulo, but we didn’t see or do much as we stayed in an area that isn’t very touristic and spent our days getting organised for the rest of our trip. So, we decided to try it again and this time we would try to see and do a little bit more.

Where to Stay in Sao Paulo

We booked a hostel in an area of Sao Paulo called Vila Madalena, this is the area you should stay in as a backpacker. It is very trendy with cool restaurants, bars, and shops but is also very cheap and relatively safe (in comparison to many other areas of Sao Paulo.)

Vila Madalena is accessible by the metro and the metro is very easy to use in Sao Paulo.

Things to do in Sao Paulo

Sao Paulo is often treated as a stopover city for people travelling in Brazil. But we didn’t want it to be that for us, we wanted to get out and about and explore the city for what it had to offer.

So many Brazilians we had met along our travels lived in Sao Paulo so with our minds full of their local knowledge, we explored all of the things to do in Sao Paulo!

Go party in the middle of the street

The first night we arrived was a Friday night, which meant we had no choice but to check out the weekend nightlife!

The hostel staff told us that Vila Madalena was a good area for partying and pointed us to a street just around the corner and up a hill. We headed there and sure enough, the street was filled with people drinking, literally though – people were crowded in the middle of the street all drinking bottled beer from buckets of ice.

We went to the nearest bar and bought a few beers and asked for the bucket and ice, and sure enough, that’s what we got. We grabbed our bucket and headed to the middle of the street with everyone else. It must just be a known fact in this area not to drive down this particular street on the weekend as you won’t get by. On the weekends, this street is for partying, not driving!

We met a few other backpackers along with some locals and stayed out until the bar closed at 2 am.

Naturally, at 2 am we found a food truck and bought some hot dogs which were amazing! Not only do they put cheese on their hot dogs but also these potato chip-like sticks (similar to Hickory Sticks).

But besides the drunk street food, we also tried a few other items in Sao Paulo. Street food is everywhere in the city and it is diverse!

While in Sao Paulo you must try tapioca which is similar to crepes but made from Yuca giving it a gritty and rubbery-like texture. They are usually filled with something savoury like a combination of meat and cheese.

Another favourite street food item of mine in Brazil was actually the grilled cheese on a stick! It looks disgusting and therefore I avoided trying it for weeks, but once I tried it I was addicted. It looks like a block of feta cheese on a stick, but it isn’t feta. It is some other cheap cheese variety they eat in Brazil, but believe me, grilled on a BBQ with butter and oregano this cheese is delicious!

I also loved that popcorn can be found as a common street food snack, I love popcorn so this was always a go-to snack for me!

Sunday we planned for a big day as we wanted to see a bit of the city before we left. We took the metro to the Japanese Village area where there are markets on Sundays.

Sao Paulo has the worlds largest Japanese population (after Japan obviously) which made the area very authentic, lively, and extremely busy. 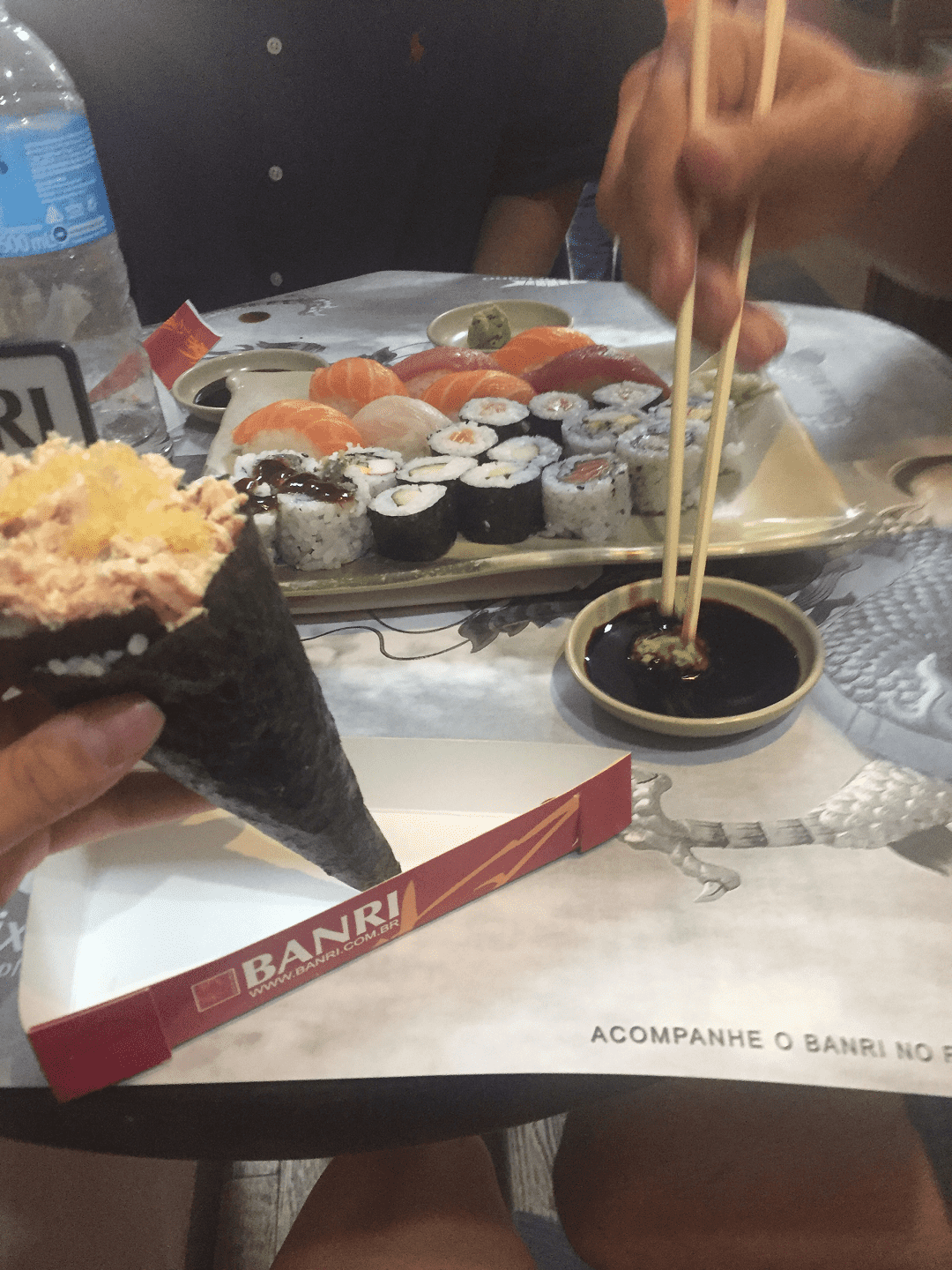 That afternoon, our friends we met in Ilha Grade who live in Sao Paulo came to Vila Madalena to meet up with us. We walked around the area and had some drinks at the local bars and tried some local food. We also went to a popular street called “Batman Ally” which is a showcase of street art, it was pretty cool to see.

Brazilians can be so kind and accommodating, they are very proud of their culture and are often very enthusiastic to share it with tourists. Thanks, Sofia and Stella, for a great evening and for taking us to Batman Ally!

Batman Ally is really an ally, but it is covered in amazing street art. I loved looking at all the unique artwork! It is a great way to spend an hour while in Sao Paulo.

That wrapped up our second time in Sao Paulo! It was again short but this time we got out and about a bit more. The city definitely is interesting and has a lot going on. It is very different from Rio and worth a visit if you are headed to Brazil.


Related Read:   13 Things You Need to Know Before Backpacking in Brazil

Another full day of buses led us to Curitiba. Curitiba is a big city but is not a popular tourist destination. We thought it could be interesting as we read it was the most modern city in Brazil and that many western countries model their recycling programs and public transport after Curitiba.

What we had read was right, this city was just like being in Canada or Australia. There were many skyscrapers, beautiful parks, and the place was clean. Many people dressed in business attire and as soon as we pulled out a map and spoke English to one another somebody would come up to us offering help, in English!

The grocery store looked just like ones back home and the locals shopped like us too, with a focus on healthy foods (as opposed to the carts full of chips and pop we saw in Lapa in Rio.) There were no homeless people because they apparently have some program that helps the homeless to get off of the streets.

Things to do in Curitiba

We only spent a day in Curitiba, but we got out and about and explored anyways! These are the things that we did while in Curitiba.

The Botanic Gardens in Curitiba are very famous for being impressive and beautiful. They were pretty to explore and a good way to get some exercise.

Many people think the Botanic Gardens are the highlight of any trip to Curitiba, I would have to disagree. While I thought that they were pretty, I think there were some better things to do in Curitiba.

While the gardens were nice, we were more impressed by the bus system to get there. The public bus stops are tube-like structures where you pay a man to enter, then you get onto the bus from a platform and can transfer from stop to stop without paying again (similar to a metro.)

There are even bus stops that are massive with bathrooms and shops and many different buses that stop there. It is very futuristic-like and works very well.

Go to the Municipal Market

On the way back from the Botanic Gardens, a man on the bus told us to get off early as the ?? markets where we could have some lunch.

The food was cheap and tasty and the markets were fun to explore afterwards. This is definitely a place to check out while in Curitiba!

Have a drink in a local pub

Like I said before, the people in Curitiba are just so friendly! We stopped in a small pub for a beer while walking back to our hostel one afternoon and were quickly approached by a local who wanted to chat.

Sometimes, the best experiences are the random ones you have in dive-bar drinking cheap beer. Talking to the people are Curitiba was the best part of our visit for sure.

Go out and party with the locals

Of course, like Sao Paulo, we went out partying one night in Curitiba which was a similar street drinking style to Sao Paulo. We went to the poorer area to party which was full of young people from the favelas. The people seemed very nice and the few that spoke English were happy to speak to us. Some people even had their dogs with them! It was a nice change to be out in a city in Brazil and feel totally safe.

After our few days of partying and exploring in the cities, it was time to switch it up again an head to a beach on Santa Catarina!

The great thing about leaving Sao Paulo or Curitiba is that there are buses to nearly everywhere! these big cities are transport hubs so the choice is all yours. Some other great places worth checking out, in my opinion, are Ilha Grande, Rio de Janerio, Northeast Brazil, Florianopolis, and Iguazu Falls.

Have you been to Sao Paulo or Curitiba before? What are your favorite things to do there? Tell us in the comments!

15 FUN Things to do in San Juan del Sur, Nicaragua